A Rocky Mountain High:  My Weekend in Boulder

Megan met me inside the train station with a huge hug.  You may remember Megan from such previous stories as “Adventures in Guatemalan Karaoke” and “How I Almost Passed Out at Palm Sunday Mass.”  She was a fellow Spanish student while I was staying in San Pedro de Atitlán last spring, and we have kept in touch over the last year. 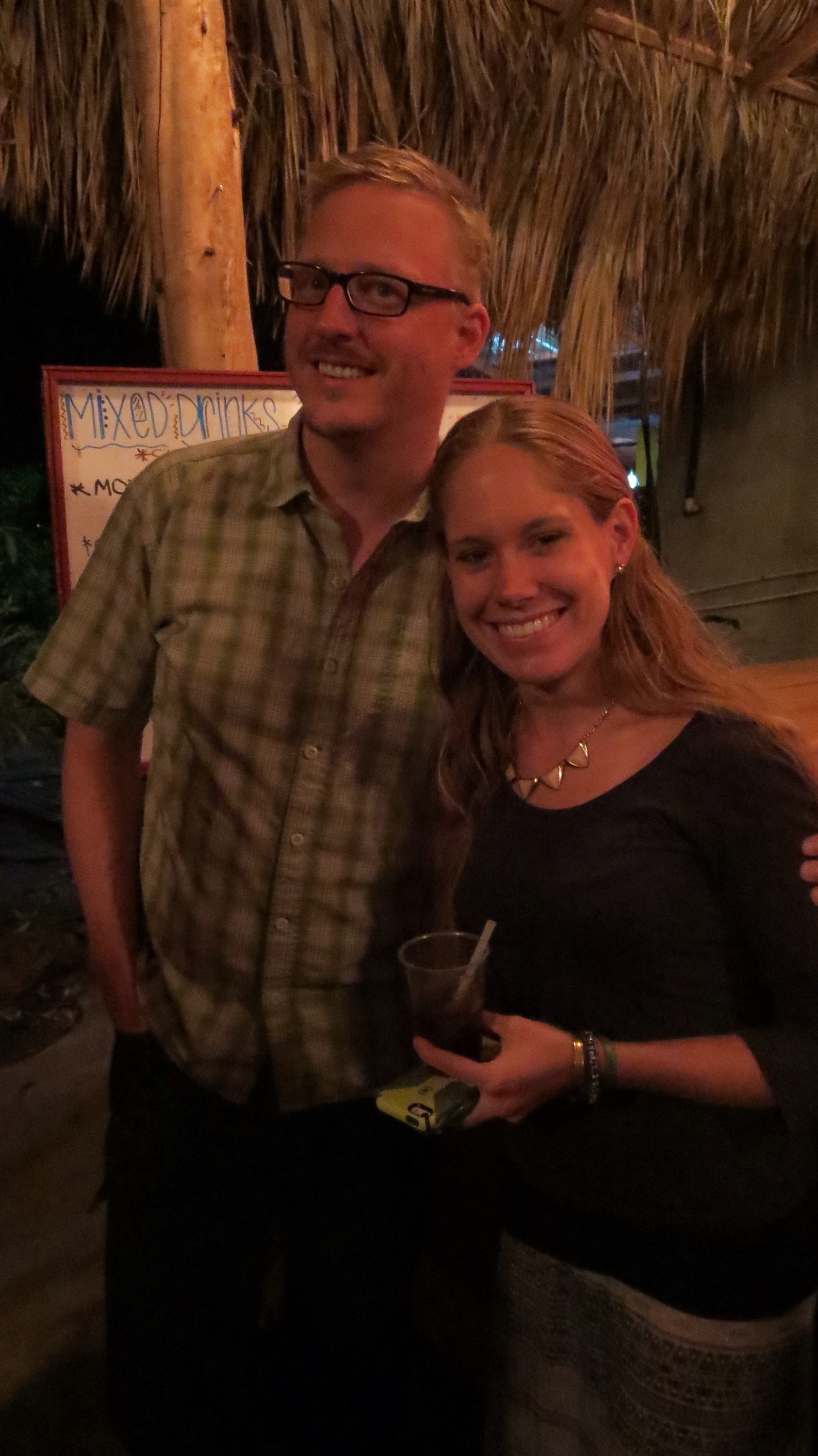 And here she is with Ken from Chicago!

We threw my luggage in the car and headed to Boulder, only about a 40-minute drive away, where Megan lives with her husband, Craig.  It was my first time driving near the Rockies, and the scenery was breathtaking. 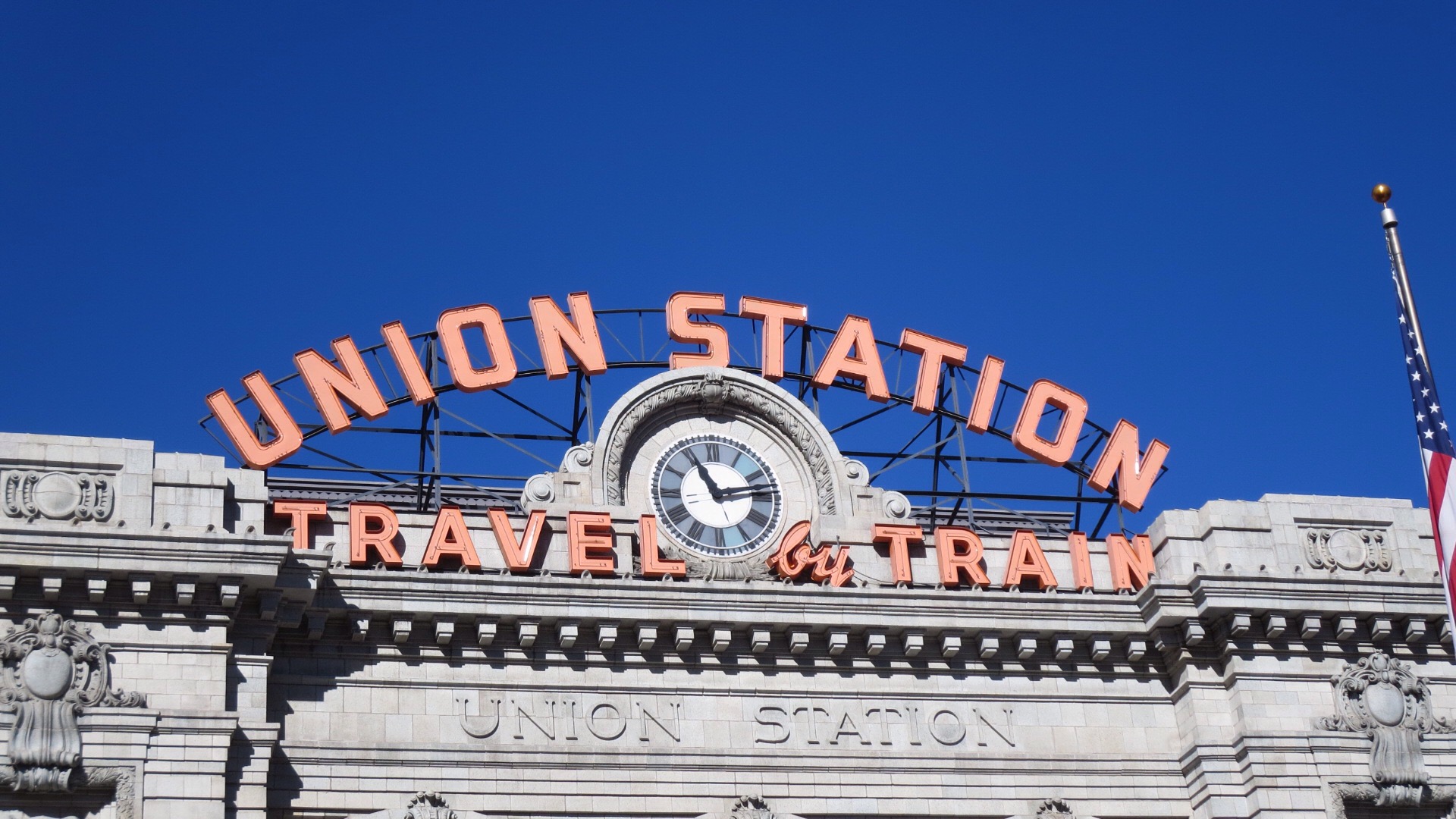 But first, let’s take another look at the awesome Denver station sign!

The drive to Boulder. Warm weather and no local snow in sight.

After showering away the grunginess from my overnight train ride, Megan and I returned to the car along with her dog Jameson and another little cutie, JTag, whom Megan was pet-sitting for the weekend.  We took advantage of the beautiful weather and headed to the park, where Megan’s friends slack-lined, the dogs looked on, and I promptly passed out on my sarong on the ground.  Perhaps I had not slept as well as I thought on the train! 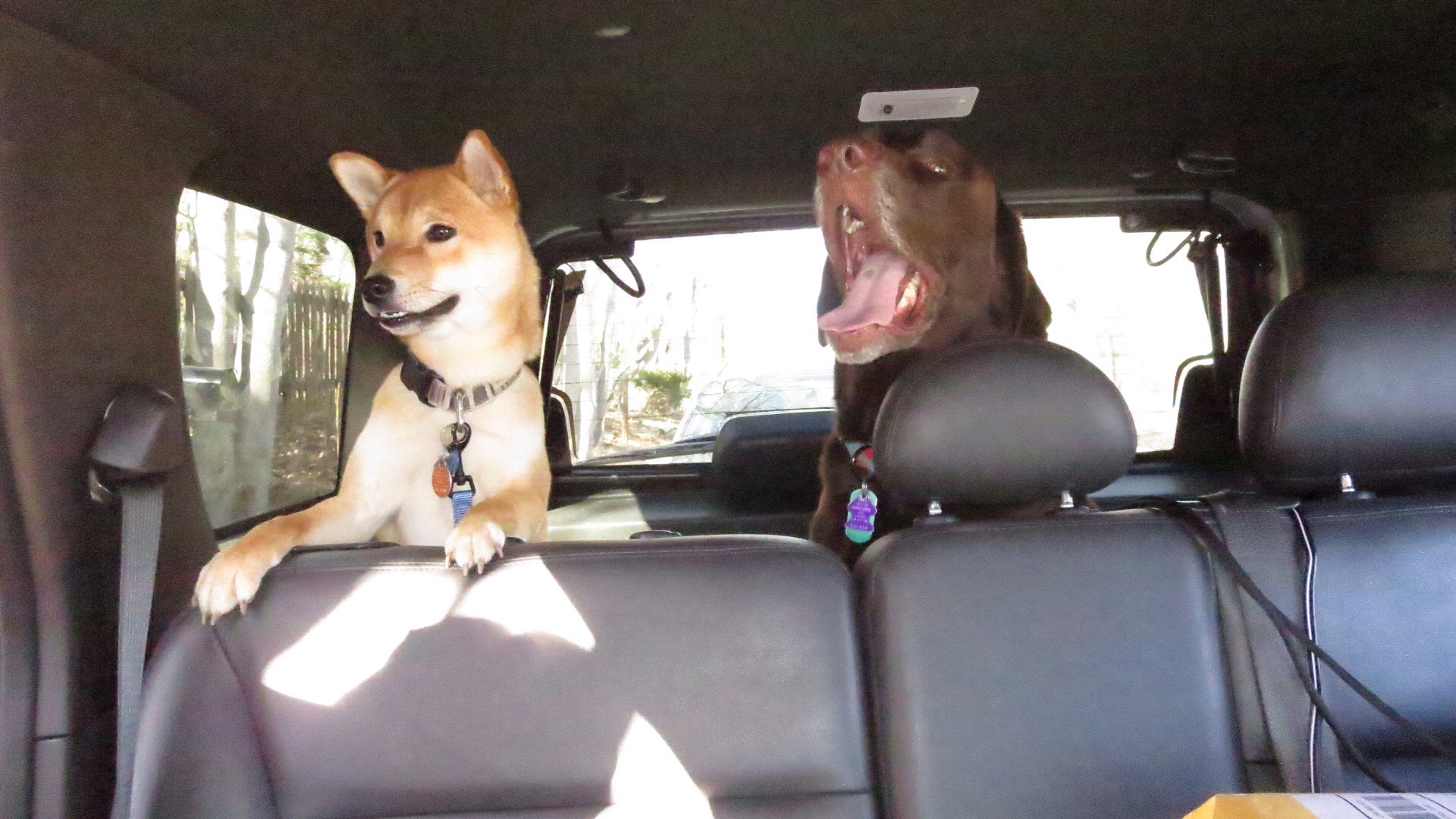 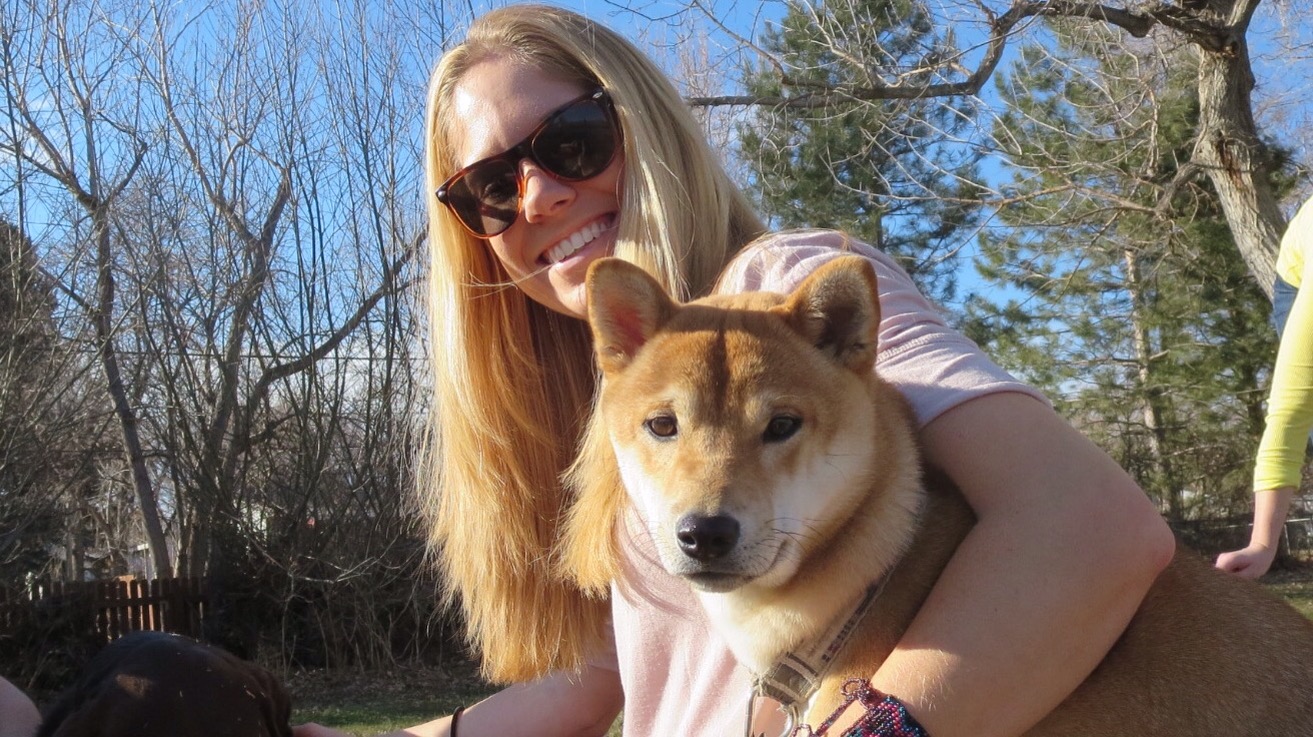 JTag, all smiles, as Meggie tries to stay on her slackline

Afterwards, we dropped off the dogs and stopped downtown for margaritas and nachos.  Sadly, neither the view from the rooftop deck nor the cool weather could keep me awake, so we stayed in the rest of the night watching movies.  I promised that I would have more energy after a real night’s sleep that was NOT in a moving vehicle.

Jordan, Megan, and Craig (and a devoured margarita)

The rooftop deck of Rio at dusk

The next morning, I felt 100% better.  Megan and I had decided to make a day of free factory tours.  We started off in Boulder at the Celestial Seasonings tea factory.  Megan has done this MANY times but still welcomes the opportunity to take another tourist friend there, because hey, free tea!  Delicious!

We were checked in at the front desk and given a packet of tea as our “ticket.”  Inside is a gallery with all of the whimsical framed artwork used on the tea packages as well as a tea bar, where you can sample as many cups as you want of any of Celestial Seasonings’ dozens of flavors.  Yum.

Part of the artwork in the gallery. Reminds me of a challenge on Project Runway. 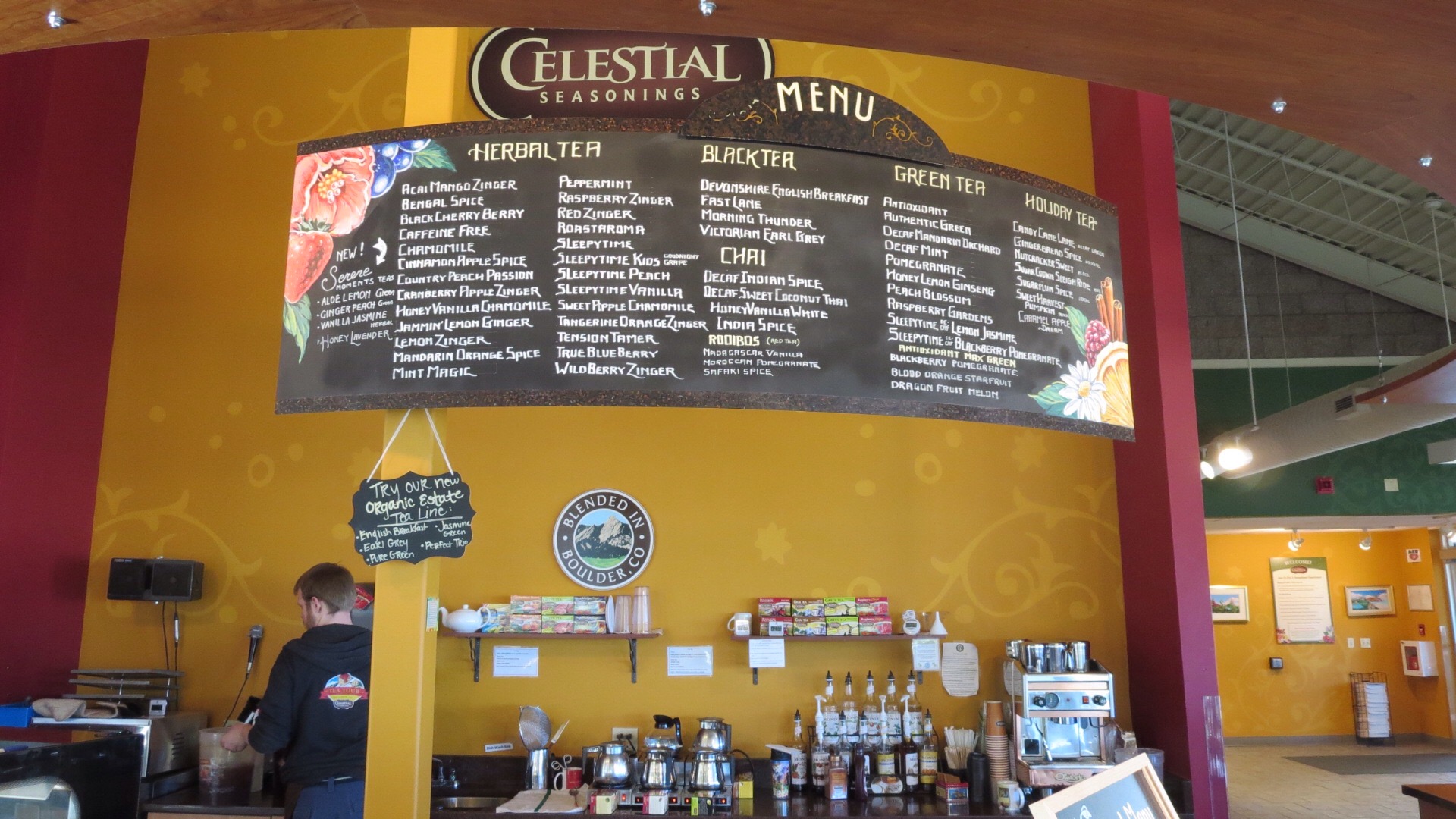 The tea bar. I had no idea there were this many flavors. I tried to pick the unusual ones.

Once we put on our hair nets (super classy)  and watched a short video, we were taken through a tour of the facility.  There was no production happening that day since it was a Sunday, but it was still really interesting to walk through the warehouse and get whiffs of all the different ingredients as you walked along.  First peach, then chamomile, then maybe licorice root or vanilla.  Megan’s absolute favorite is The Peppermint Room:  because of the strength of the mints’ oils, CS has to keep all of the peppermint, spearmint, and catnip (apparently this is also in the mint family.  Ya learn something new every day!) sequestered in a separate room of the warehouse to prevent scent and flavor contamination of the other ingredients.  Upon entering the room, it took about 30 seconds for the pleasant but potent minty smell to clear our sinuses and make ours eyes water.  Mmm…hurts so good!

After some  time in the Celestial Seasonings gift shop and a stop in Boulder for a snack, we hit the highway for Golden, going from bear hug…

Although it was late in the afternoon, we were able to make it into one of the last tour groups of the Coors Brewery.   I have done brewery tours before (hello, Sam Adams!), but never one on this grand a scale.  I love the warm, earthy smell of brewing beer.  And the best part:  a few free samples at the end.  Megan travels extensively (she and her husband recently returned from Sri Lanka, India, and the Maldives on their honeymoon.  Girl puts me to shame!), and apparently, so did our Coors bartender, so we practically closed down the bar talking like the travel fangirls that we are :).

After returning to downtown Boulder for dinner, we made it home to find Megan’s cat Oliver in a comfortable new spot: 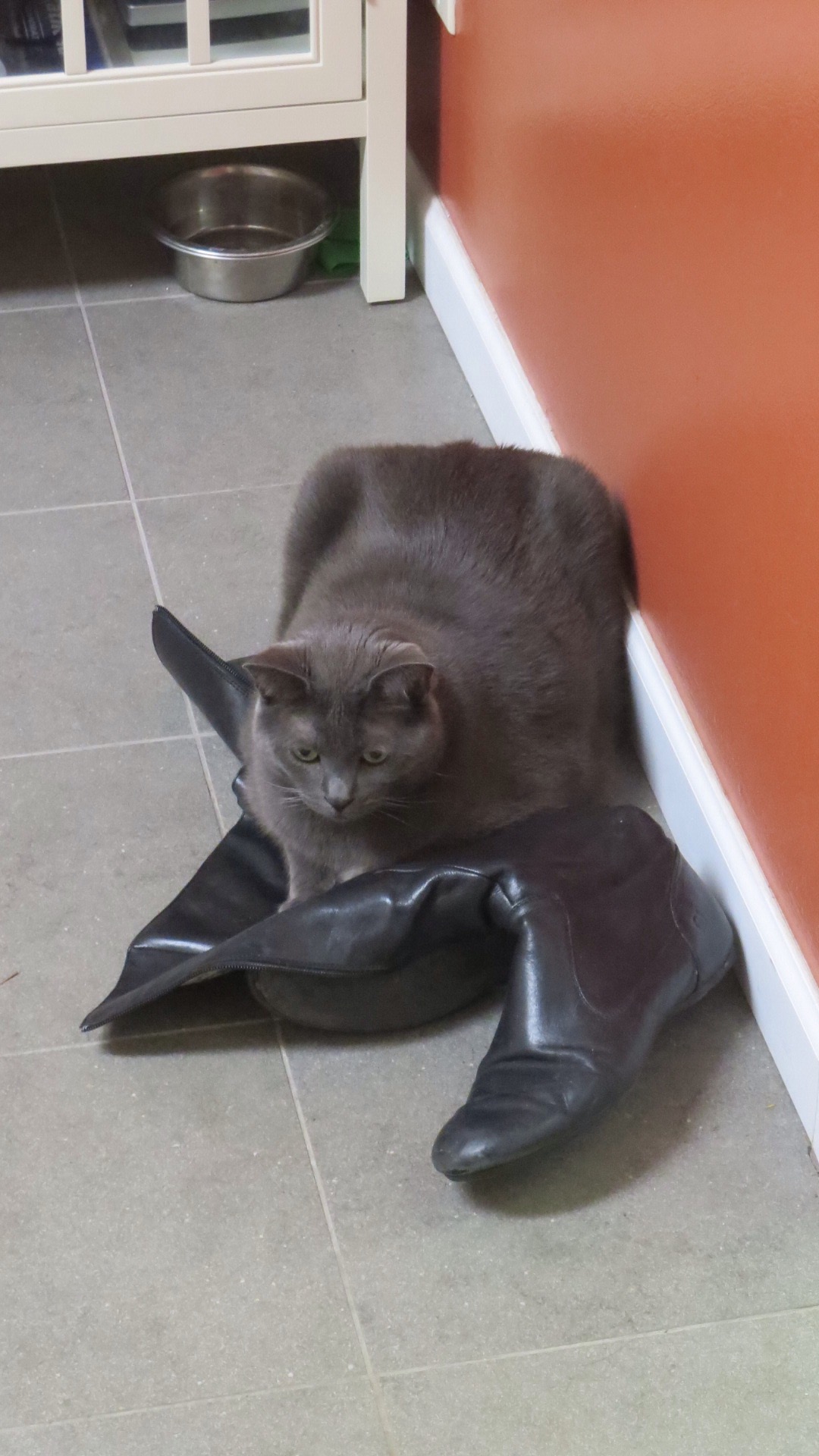 Puss in (my) Boots

We woke up at the crack of dawn on Monday so that I could catch my train from Denver to Emeryville, CA, the final leg of the trip.  Miraculously, we did not encounter too much traffic on the ride there. 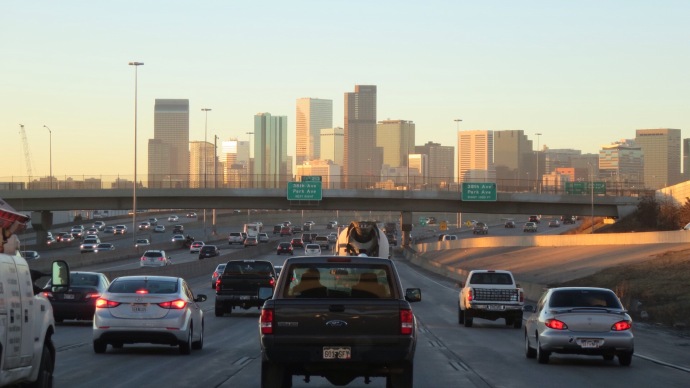 It was so good to be able to spend some time with Megan and Craig.  It never ceases to amaze me how close you can feel to people after knowing them for such a short time.  You guys are welcome in Cleveland anytime!

Megan and I hugged goodbye, and I went inside to squeeze in some final photos of Union Station before my ultimate train journey -through the Colorado mountains and Nevada desert- began.

Hmm…tempting pastries, but I’ll stick with my oatmeal cup, thank you.

I love this mural!

On a Plain: Chicago to Denver

After meeting for lunch nearby with my friend Pete (who declined to be photographed for this blog), I made my way back to Chicago Union Station to catch my train, the California Zephyr, which terminates just outside of San Francisco.  This would be my second overnighter, arriving in Denver early the next morning.  I took a spot in line behind a young Asian man with a remarkably minimalist backpack.  “This is to Denver?” he asked me.  “Yup, that’s where I’m headed, too,” I replied.  “Where are you from?”

“Japan,” he answered, “but my English not very good.”

“Ooh, Japan!” I responded.  “I would LOVE to go to Japan.  I was traveling around Asia a few months ago, but Japan was much too expensive to include in my plan.  Maybe next time!”

“Excuse me, where have you traveled in Asia?” asked the man in front of us in line as he shuffled his snowboard bag forward.  He wore a patterned wool hat and carried a large backpack.  It looked as if he was bound for Colorado as well.  I described my trip itinerary to him, and it turned out that he had also traveled to Hong Kong and much of Southeast Asia.  As we boarded the train, we sat in seats across the aisle from each other so that we could continue our conversation.  I learned that his name was Jim, and even though he lives and works in the New York City area, he is originally from outside of Boston.  Go figure.

I was excited to be on the Zephyr because this train has a bit of a different layout than the Lake Shore Limited that I had taken between Chicago and the East Coast.  The Zephyr is a double-decker train with the majority of passenger seating on the upper level. In addition to a cafe car and a permanent dining car (unlike the LSL’s dining car which splits off from the Boston-bound train in Albany), it also has an observation car, which includes both tables and a large area of single seats which face the high windows. Excellent sightseeing opportunities!

Hangin’ out in the table section of the observation car

I was immediately impressed with the frequent updates (unfortunately in regards to delays, but appreciated all the same) by the train staff.  Maybe it was because the Chicago-East Coast route is populated more by commuters rather than leisure travelers, but I noticed that everyone on this route – staff included – was a bit more relaxed and convivial.  We also noted the presence of mostly older couples wearing red America by Rail tour nametags on lanyards around their necks.  What a fun vacation to take!

Jim and I spent the next several hours talking and watching the flat and snowy landscape go by. 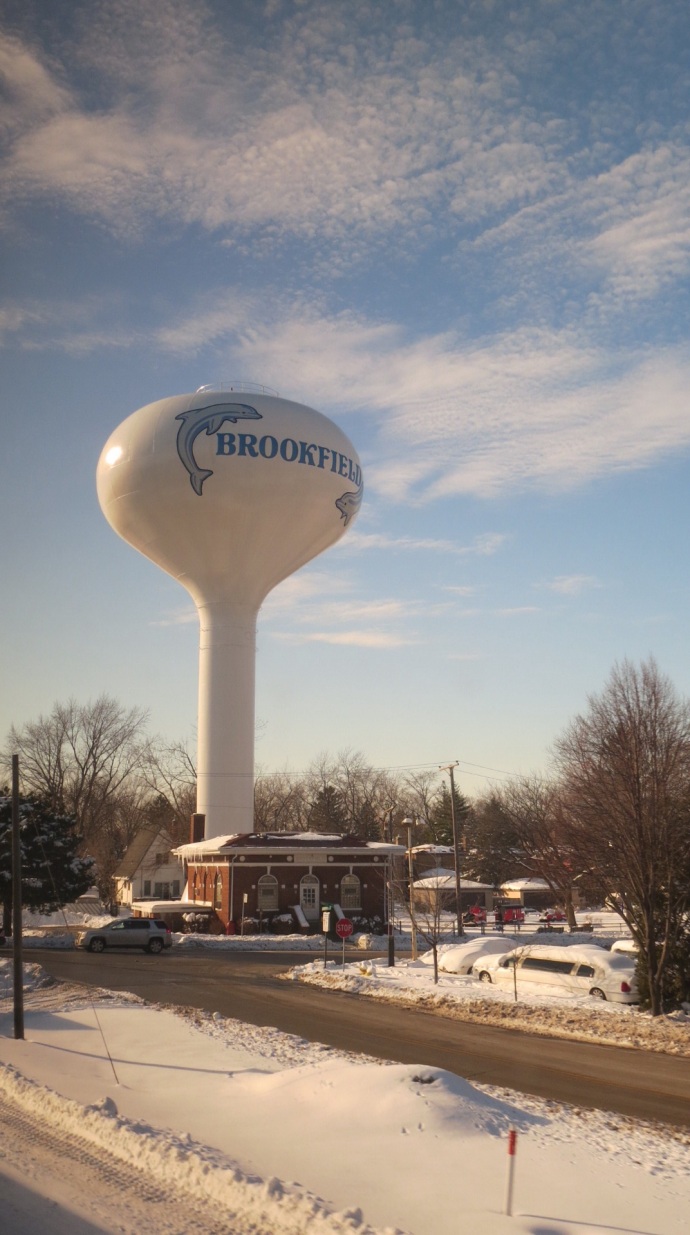 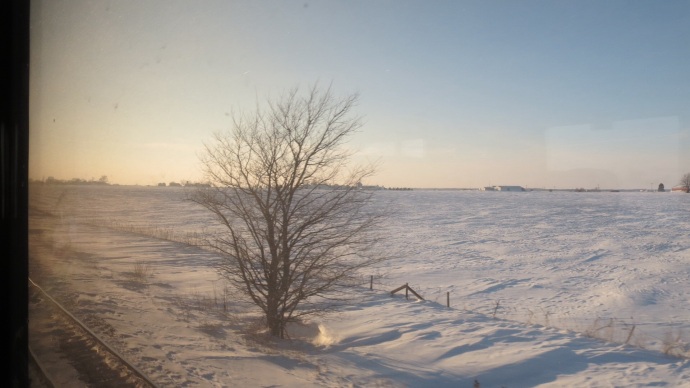 Flat and snowy and peaceful 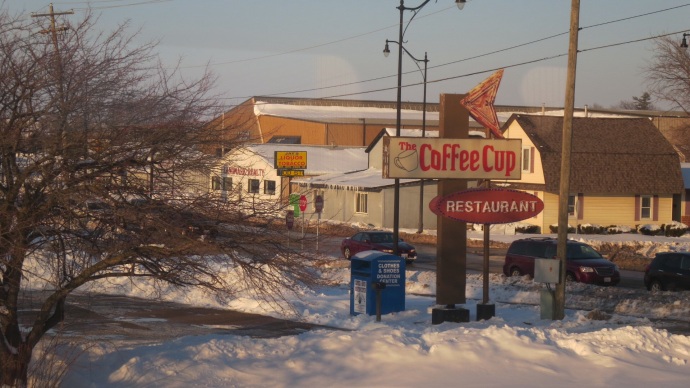 I loved rolling through little towns and seeing the local shops and restaurants.

Wind turbines in the distance 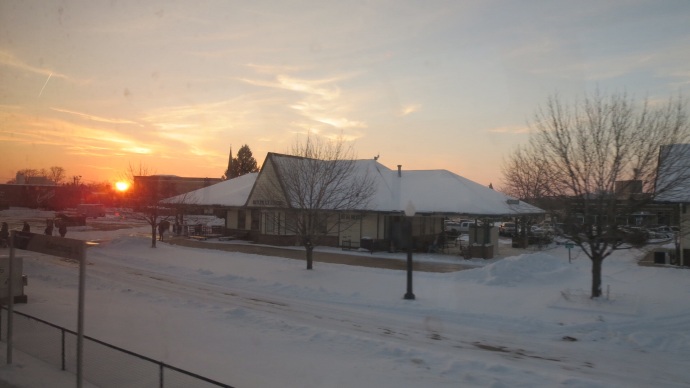 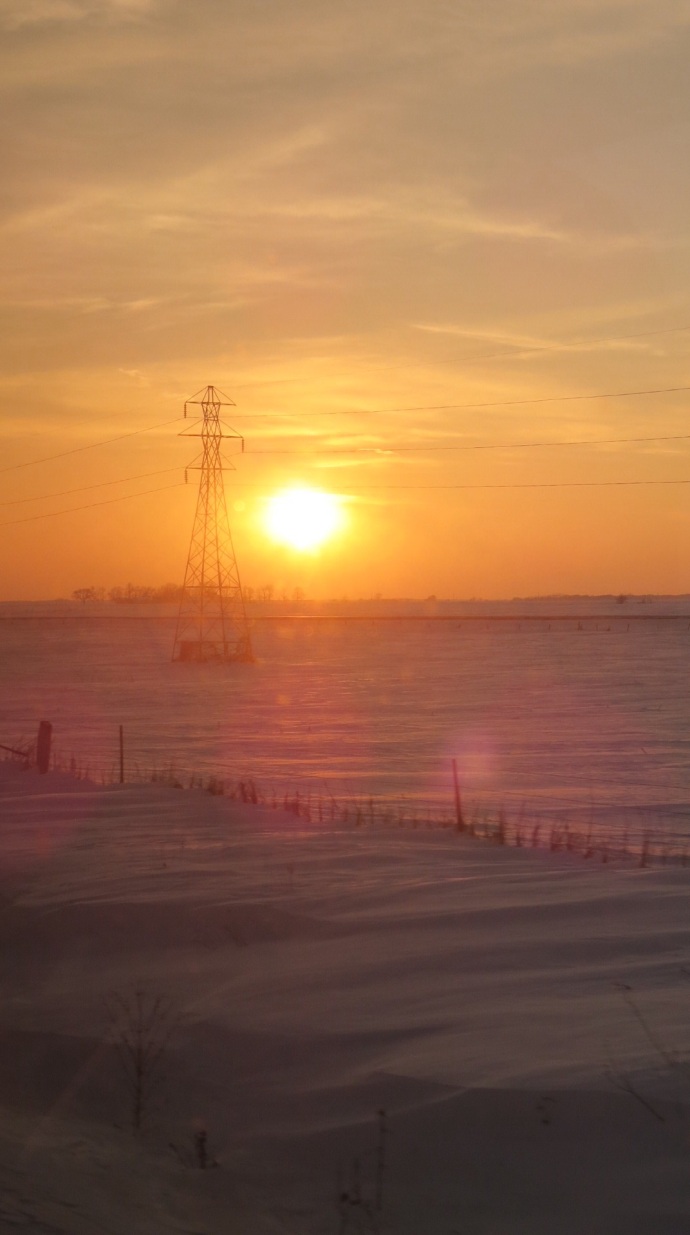 After dark, we passed an exciting milestone by crossing over the Mississippi River.  Sadly, my photos were so blurry and underwhelming that they do not warrant a spot in this blog.

A train attendant had come by earlier to take reservations for dinner in the dining car.  Since I had been keeping to a pretty low food budget with my oatmeals, Easy Macs, and snacks, I decided to treat myself to an actual cooked meal.  Jim and I signed up for a 7:15 dinner time and were seated at a table with another passenger, Marla, who works in the publishing industry.  My meal was…okay, but the company in the dining car (including conversations between all of the tables about which celebrity we would most like to take on a date) more than made up for it. 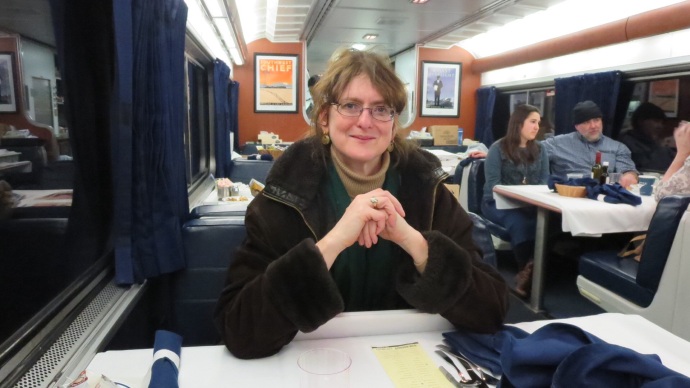 Me with Jim (in his Boston Strong shirt, haha)

After dark, we passed an excitiing milestone when we crossed over the Mississippi River.  Sadly, my photos are so blurry and underwhelming that they do not warrant a spot on this blog.

I was finally getting the hang of overnighters on the train and slept without a problem.  When I awoke just before dawn, I blearily looked out the window, expecting to see the outlines of the Rockies in the distance, since our train was due to arrive in Denver at 7:15 am.  In my myopia, the skyline was a block of orange sitting upon a sea of black, but as I fumbled for and donned my glasses, I saw… an orange sky over a dark plain.  Um, weren’t we supposed to be in Colorado?  A thought came to mind (note:  some objectionable language in this clip):

I soon heard rumblings from other passengers that our train had managed to fall behind by four hours during the night.  Sigh:  oh well.  It’s one of the joys of leisurely train travel that a delay might simply mean that you have more time to enjoy the scenery.  Which is what I did, popping my ChooChoo! Mix on my iPod and quietly watching the shadow of our train pass over the golden fields and small towns of Nebraska.

I feel like this could be the cover of a copy of Atlas Shrugged. 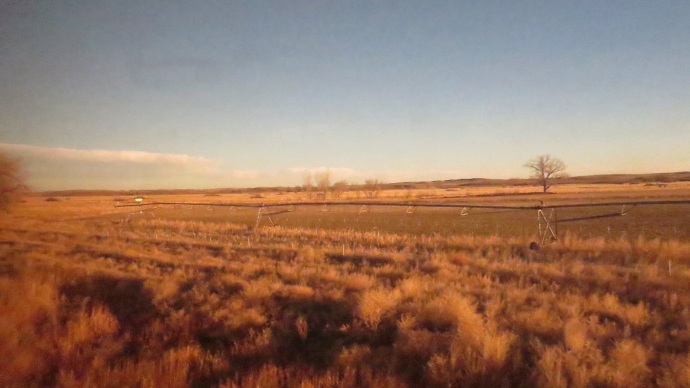 Once Jim woke up, we headed back over to the observation car for breakfast in the hopes of catching our first glimpses of the mountains.

A popular spot. People had already staked out seats and were playing cards. 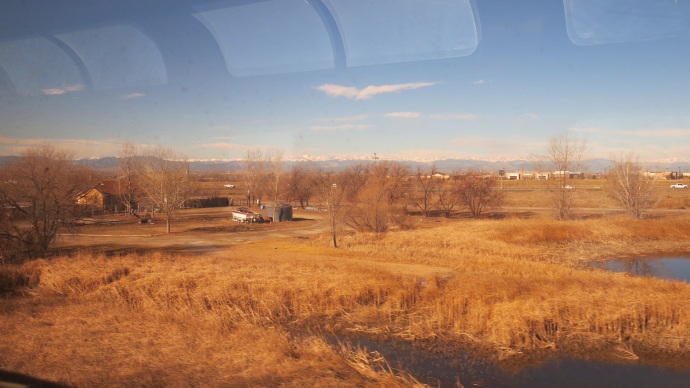 So pretty. Having grown up in Ohio, the sight of mountains in the distance always gets to me.

Our train finally rolled into Denver Union Station around 11:15 am.  We stepped off the train into -what? Warm weather???  Just two days earlier, I was wearing two pairs of pants in the snow, and now a long-sleeved shirt would suffice.  Union Station is gorgeous, having been recently restored.  I strolled around, taking photos and drooling.  All I know is that someday I will spend a night at the historic hotel (I know, I know, me and my historic hotels) within the station, the Crawford, which is both a) super swanky, and b) completely out of my budget right now.  But someday…. 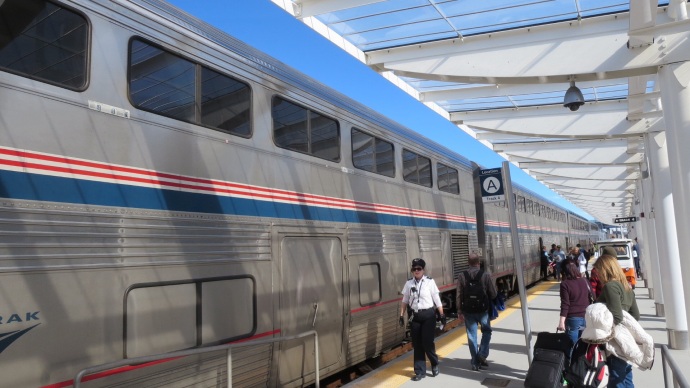 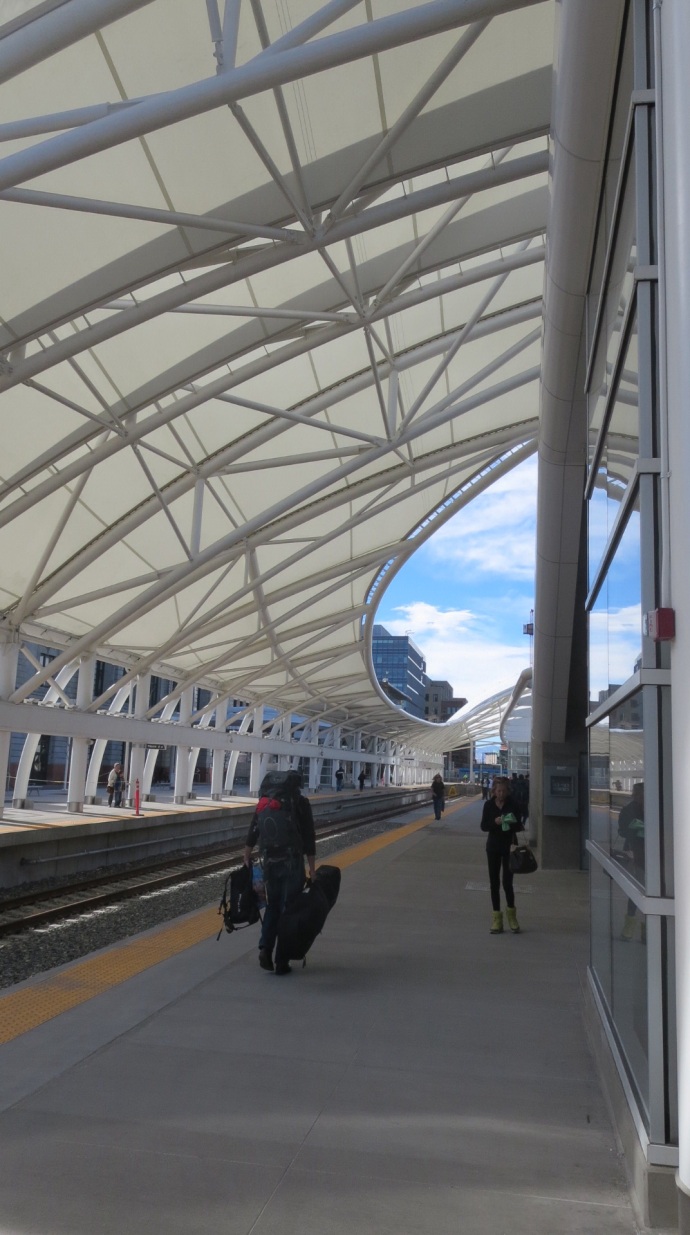 Inside the station/Crawford Hotel. Drool. 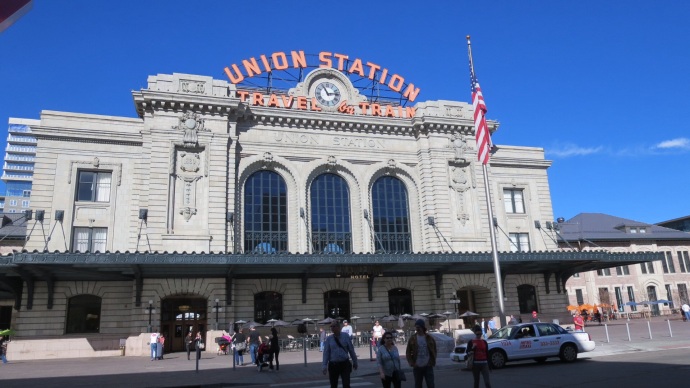 Jim and I said our goodbyes.  He was off to rent a car to meet up with friends for a ski vacation.  I headed in the other direction to find my Guatemala friend Megan and start our fun-filled weekend in nearby Boulder.