Get your Kotor runnin’

Posted on October 1, 2014 by toothontheloose

The bus ride from Dubrovnik took much longer than I anticipated. While the bus zipped along for the beautiful views at sunset along the coast, our trip was stalled at the Croatia-Montenegro border for over an hour. After the standard collection of passports for inspection by border patrol, the guards picked two young men -both in scruffy, bohemian clothes- and asked them to step out for questioning and luggage check. I can only assume that they were looking for drugs, because this was not the first border check where I have seen guys with a similar appearance singled out. In the meantime, the bus was shut down, turning the inside lights and air conditioning off: Sweat City. This lasted entirely too long, and I was wondering how much longer it would take, as we still had quite a bit farther to drive and I didn’t bring much food with me. I watched as a family of dogs galloped around the security office like they owned the place.

The men were finally allowed back aboard, and the bus continued in the dark. (Later on at the station in Kotor, there was a huge shouting match between the two guys and our bus driver during which they swore like sailors and accused him of discrimination). The rest of the trip went smoothly, though, punctuated only by the gargantuan yawns of the British backpacker sitting behind me: “YEEEEEAAAAWWWWWWWWWWWW.” After the 7th or 8th of these, she started receiving dirty looks from other passengers. “Whuh?” she countered. “Cahn’t a person even YAHWN in peace?”

Kotor, our destination, is an old city on an inland bay which is often mistaken for a fjord. The road there swerves directly along the water, tracing the multiple inlets of the bay like the petals of a flower. In the dark, only the moonlight illuminated our surroundings. I could see the reflection of the water, the tiny lights from cities across the way, and the eerie blue sheen of the nearby peaks. It would be interesting to see what this actually looked like once morning came. In the distance, I saw rows of bright lights which I assumed was a hotel. As we approached, I realized that it was not a hotel but instead an enormous cruise ship docked at the port in Kotor, dwarfing everything around it. It was almost frighteningly large. The Yawner was also impressed: “GAWD! I cannot even WRAHP my HEAD around the sheer PHYSICS of that thing!”

I had booked a private room with a shared bathroom in the village of Prčanj, which is about a 10-minute drive from Kotor. (I tend to gravitate toward places with unpronounceable, vowel-poor names that end in a silent “J.” They comfort me.  Call it solidarity 😉 ). Once at the station, I had been warned to only use taxis which used a meter, so I accepted a ride from a tough-looking but honest female taxi driver named Anđe. I couldn’t get to the room fast enough: I was exhausted, sticky with sweat, and famished. I was welcomed into the apartment complex by Danijela, the daughter of the owners, who spoke in excellent English and offered me some homemade pastries. I almost cried. She showed me to my room, where I declined her invitation to join her at a neighborhood festival in favor of going straight to sleep. 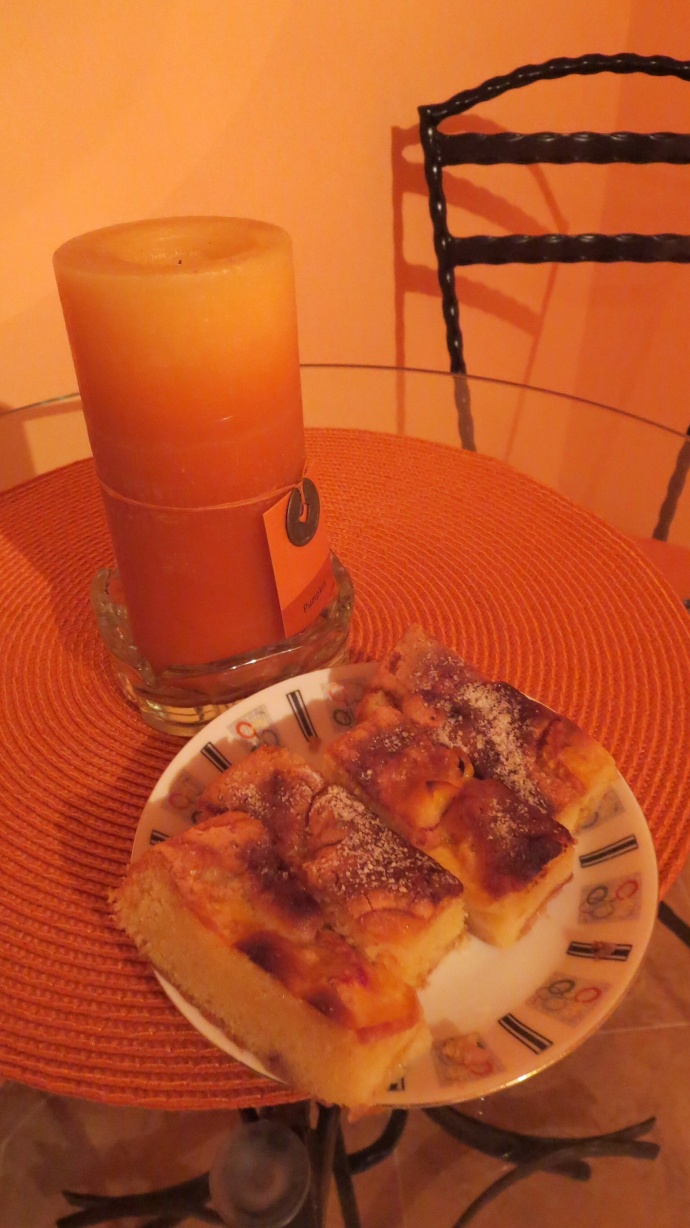 In the morning, I got to see what I had missed the night before. Holy cow.

View from the common area

View from my room

Prčanj ended up being the best possible place that I could have stayed; in fact, I ended up booking an additional night (and would have stayed longer had there been availability). The apartments were a two-minute walk from the water. In the village were several small grocery stores where I bought food to cook in the shared kitchen, a few restaurants, several churches, and scattered docks from which to swim. A local bus came by hourly on the way to Kotor and cost only 1 Euro. I saw mostly local tourists (Montenegrin along with several Bosnian and Serbian license plates). Families filled the docks to swim during the day, but the place was quiet and peaceful at night. I was in love. 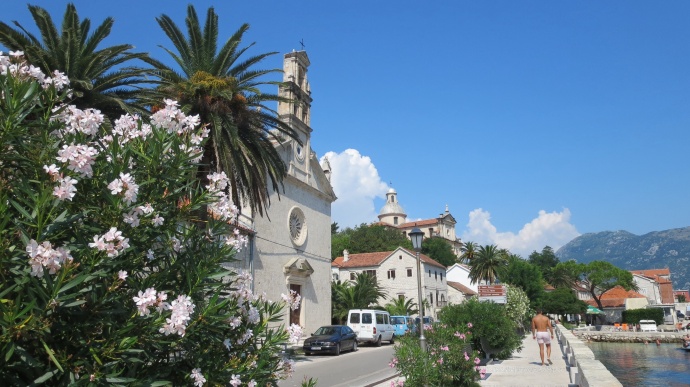 It was a great place to do nothing. I’d go swimming daily, enjoying the water, which was considerably less salty than the Adriatic had been, and marveling at the enormity of the surrounding cliffs. I could never get tired of looking at them.  I took a trip one afternoon to Kotor, which was pleasant but whose noise level made me very thankful that I was staying elsewhere. 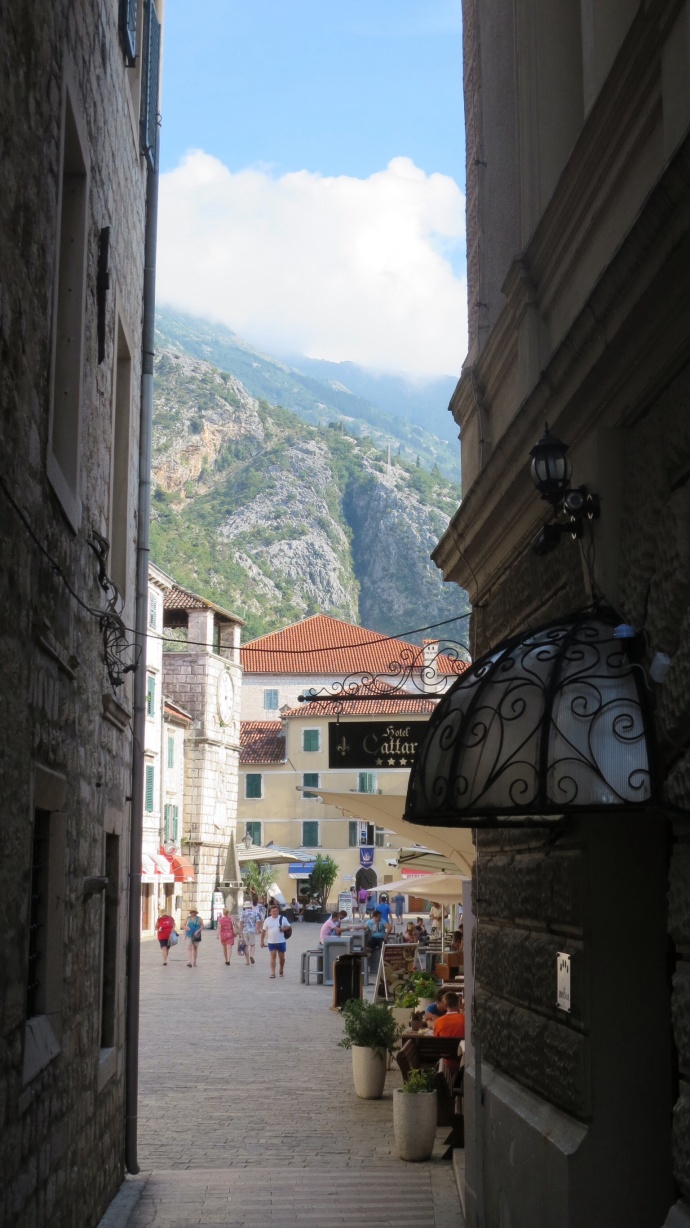 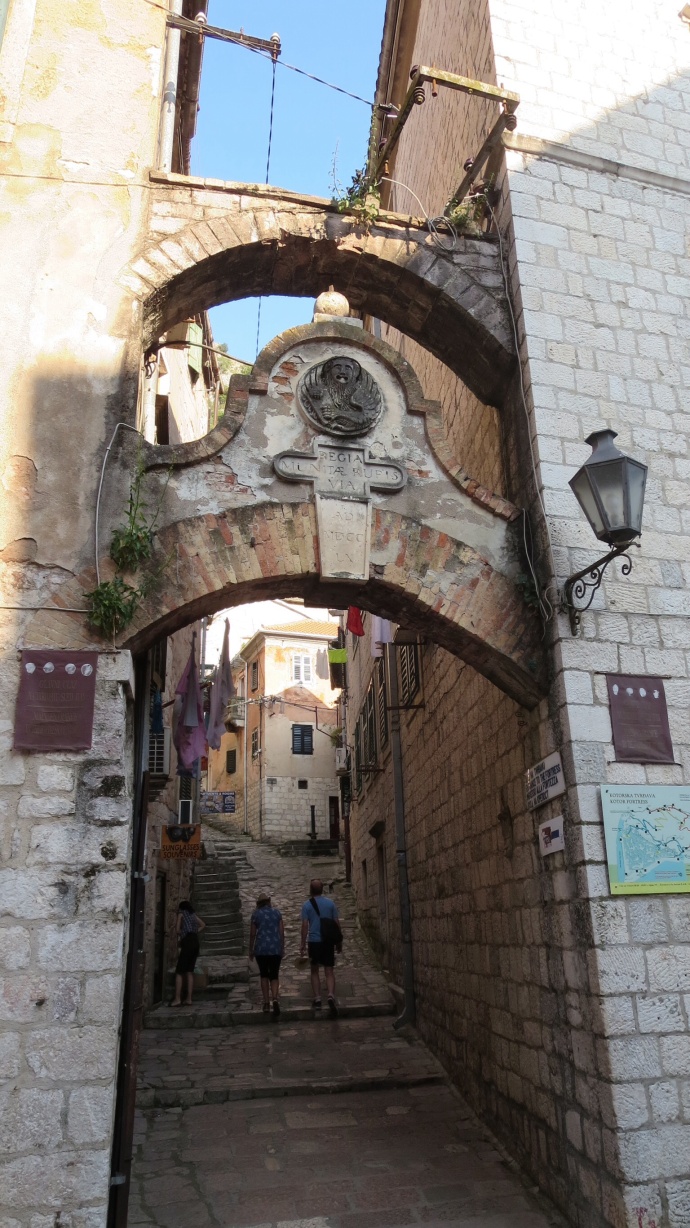 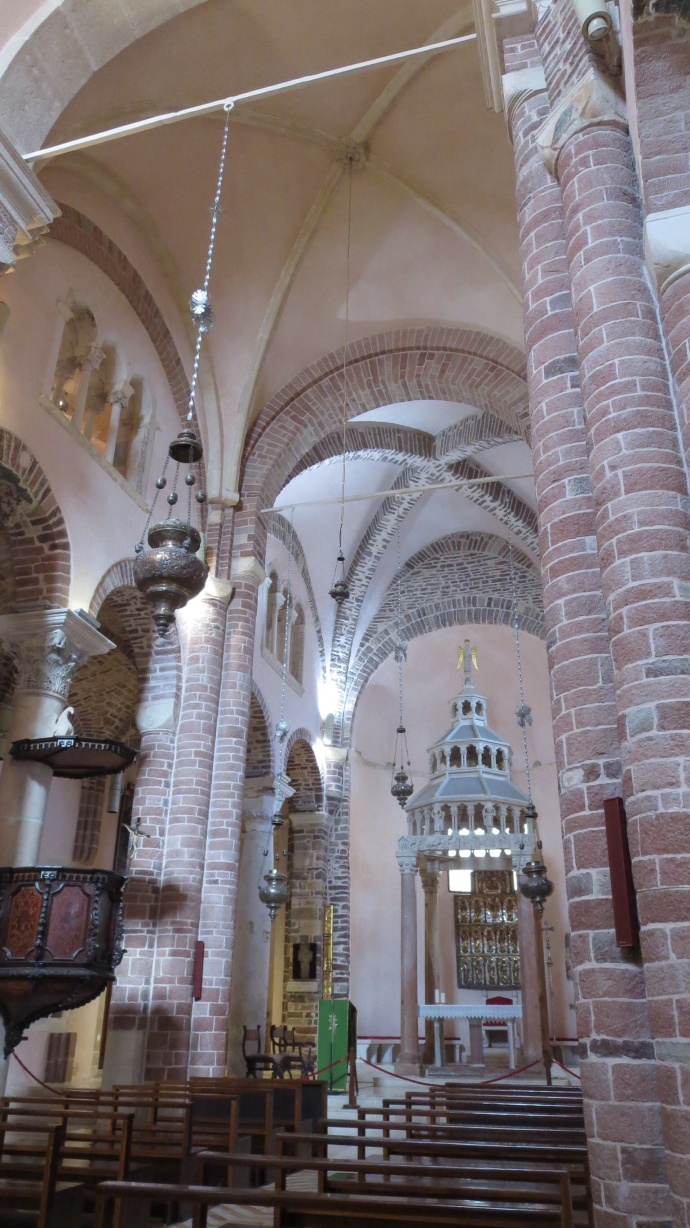 Inside St. Tryphon’s Cathedral. Check out the pink stone. 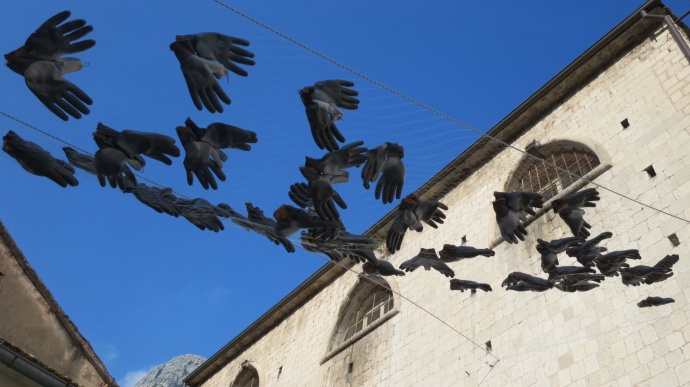 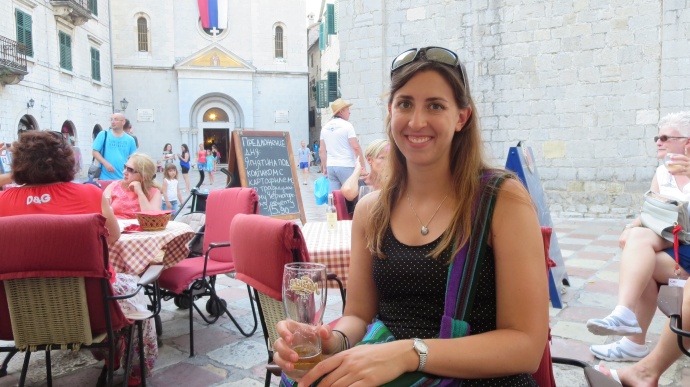 Midway through my stay, I was returning one afternoon from the “beach” and ran into two women about my age in the hallway. I was surprised to hear them speaking English. They introduced themselves as Fernanda, who is originally from Brazil but has lived and worked in the US for over 15 years, and Elena from Italy. Fernanda was also traveling through the Balkans solo and had a itinerary oddly similar to mine. Elena,  a surgeon, was completing a shorter trip, but on her motorcycle. Two words: BAD ASS. They convinced me to ditch my plans of staying in for the evening and to instead join them for dinner in Kotor. They had even arranged a taxi, which would be arriving shortly. OK, twist my arm.

By the way, the road along the waterfront to Kotor could be described as treacherous at best. Not quite wide enough for two cars and at points only inches from a dropoff to the water, it created frequent traffic jams during busy periods and games of chicken where only one vehicle would be able to pass at a time. Add that to the curves in the road, and you can see why I almost got hit several times just while walking to the store. Our cab encountered no hassles, though, and I made our taxi driver (another cool woman who was really into classic rock) laugh by singing harmony to “More Than Words.” The three of us wandered the streets of the old town together.  It was so nice to have dinner with other people: I don’t mind being alone at all, but company is almost always appreciated!

Those cliffs again. Ain’t they purty?

Though Elena was leaving the next day, Fernanda would be staying, so we decided to hit the beach together and then get a taxi to visit Perast, a quaint town on the other side of the bay. We didn’t do too much there other than get coffee, but it was a beautiful place to see at dusk. Fernanda and I got along so well that we checked her itinerary to see if there was a way that we could meet up again somewhere in the Balkans. We set a tentative goal of meeting in Albania in the following week. Isn’t traveling fun? 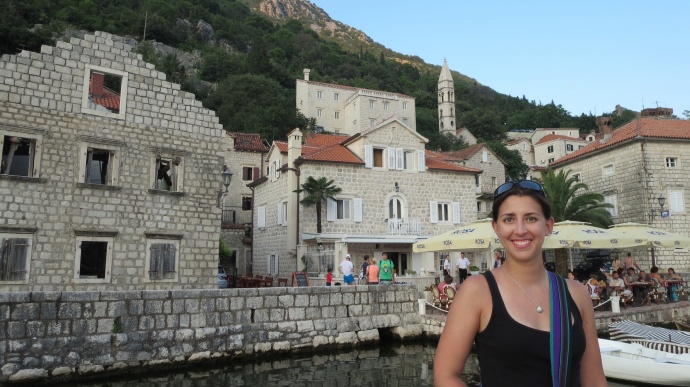 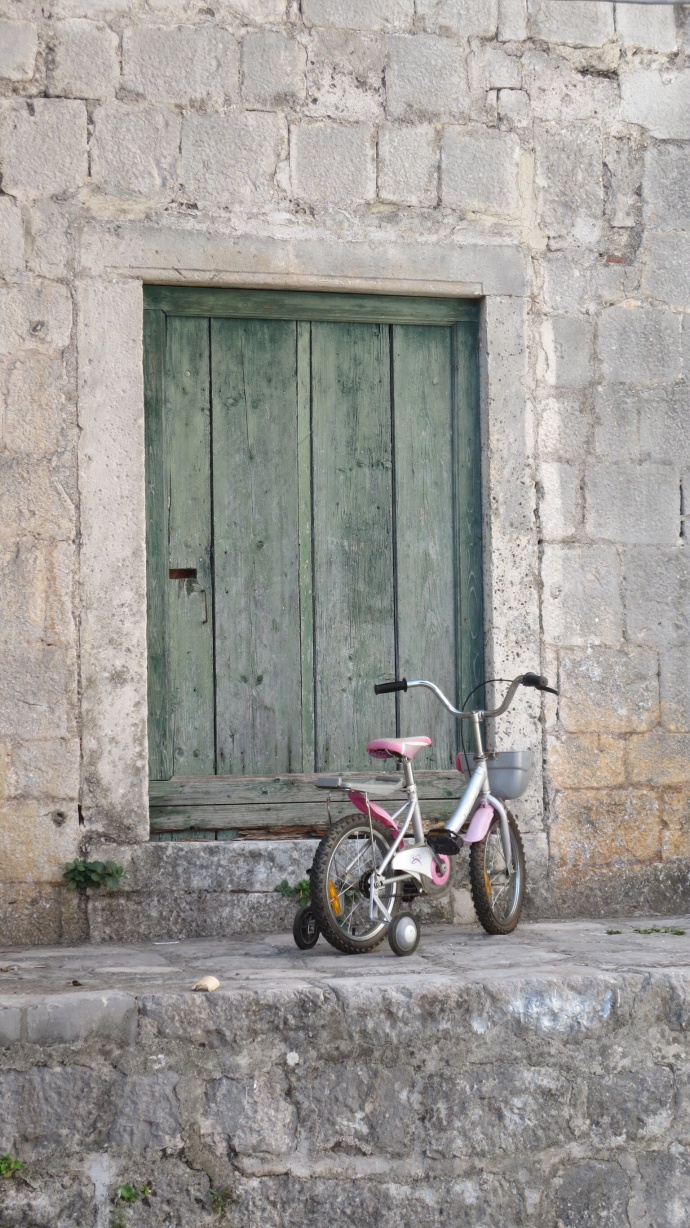 Note the narrow road and its proximity to the water. Yikes. 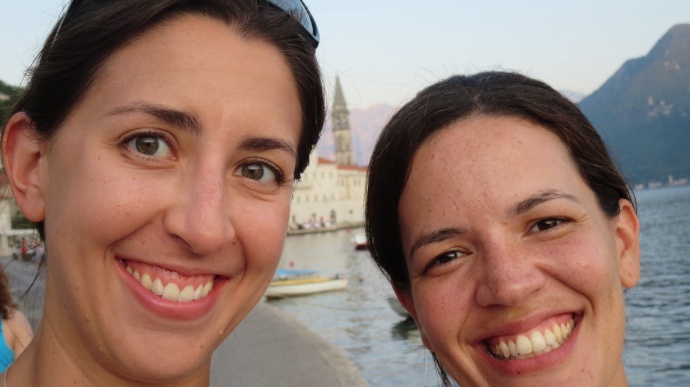 Oddly well-centered selfie of me, Fernanda, and the Perast belltower

With regret, I left the Bay of Kotor for my next stop, Budva.