OK, so the title of this post is somewhat misleading, since “road trip” usually implies that A) you are driving somewhere, and B) you are traveling with at least one other person. While this was not the case, I at least A) took a lancha from San Pedro to Panajachel and then a shuttle to Antigua, where I would be B) meeting up with Megan (from Seeking Somewhere), who had left San Pedro after our karaoke extravaganza in order to check out other parts of Guatemala, namely Tikal and Semuc Champey.

I checked into a lovely guesthouse, Posada Juma Ocag, which had a private single room, en suite, for only 100Q, or just under $13. The rooms overlooked a small green courtyard. Part of me wants to keep this place a secret since it’s so nice, but the staff people are friendly and do a great job, so I’m happy to recommend them. I spent Friday evening checking out the festivities near Iglesia La Merced, which was already preparing for Palm Sunday.

My $13 room at Posada Juma Ocag

Megan and I had originally planned to hike the volcano Pacaya on Saturday, but as she had only arrived in town at 6am and was dead tired, and I was suffering from a painful lump on the top of my left foot (I know, the random ailments continue), we decided to just take it easy and enjoy the ambience of Antigua for the weekend. Antigua Guatemala is a Spanish colonial town, not unlike Granada in Nicaragua, and it was absolutely abuzz with locals and tourists alike for the beginning of Semana Santa, or Holy Week. I had read about the popular processions involved with this week, but never did I expect anything so elaborate. The entire week, there are outdoor festivals and displays in the churches, streets covered in flowers, and bands playing sacred music. 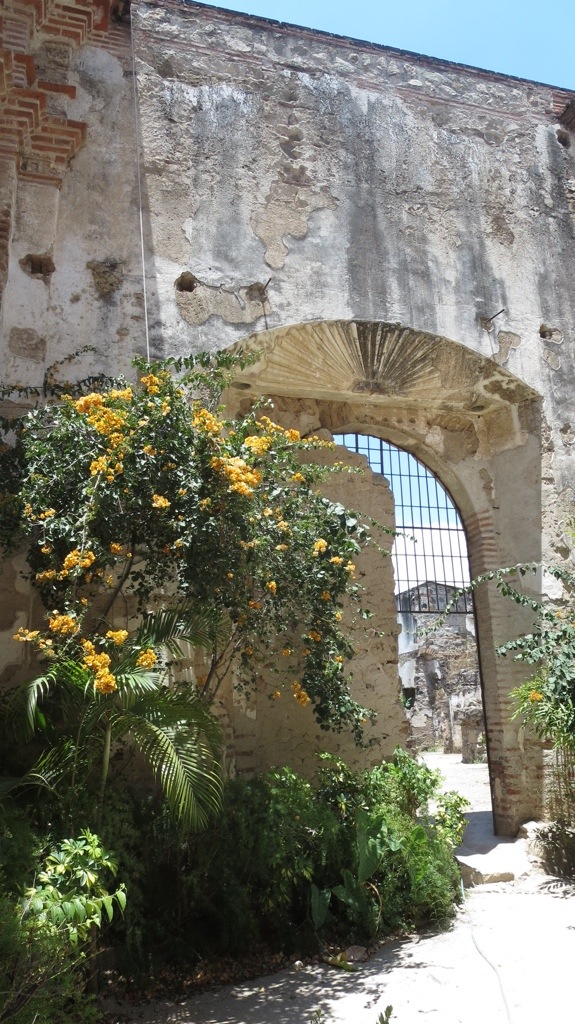 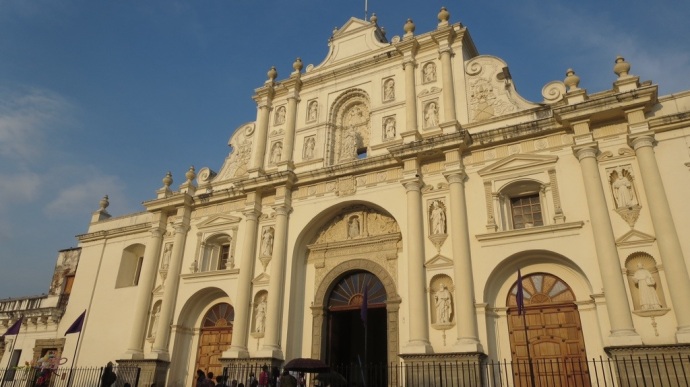 Megan and I picked up coffee and bread for a mini-breakfast and went to Iglesia La Merced, the main cathedral, on Sunday morning for Palm Sunday Mass. Unfortunately, I got the times wrong, and by the time we arrived, the service had already started, and the church was packed with people. We were able to squeeze in to get some standing room, but about halfway through, the lack of space and air started to affect me. I was getting visions of my preteen days when I constantly felt faint during Mass… and then I started seeing stars. I needed to get out of there. The outside of the church wasn’t much better: stifling heat, massive crowds of people, and a myriad of street vendors. (This merits a quick comment on the festivities: while I understand that most of the vendors are there to feed the throngs of people who come to watch the processions, it did feel a little strange to see men selling motorized helicopters and Dora the Explorer or Minion balloons at a religious event. It made me think a lot about the distinction between what is “religious” and what is “cultural”). 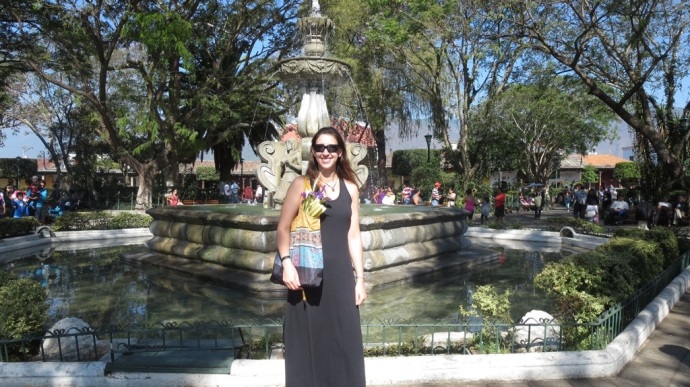 On the way to Mass with my palm branch, in front of the fountain of Our Lady of Perpetual Lactation (Kidding. Those are sirens).

Selling palms outside the church

Once I had recovered by eating a good breakfast in the shade of a restaurant, Megan and I searched for a shady spot on the street to watch the processions. We lucked out in that we had chosen a spot right in front of a beauty salon; when the processions started down our block, the ladies from the salon brought out a small bench and allowed Megan to stand on it to get a better view.

Most processions that I saw followed the same standard: men and boys with matracas pave the way, followed by younger boys with incense and men in purple robes, the cargadores or cucuruchos, who take turns bearing the weight of the enormous andas of the procession. (I have read that some of these can weight up to 4 tons). There is always a lead cargador in white who stands at the head of the anda, steering and controlling the speed of the group. The first anda is followed by a band and then by a second, smaller anda with the Virgin Mary, which is carried by female cargadoras in white blouses and black skirts. After the second band comes the clean-up crew, which efficiently scoops up the alfombras of flowers, which the townspeople worked all night to create.

These alfombras are absolutely spectacular and are comprised of flowers, tinted sawdust, plants, and fruit. Rather than ramble on, I think it’s best to let the photos speak for themselves. 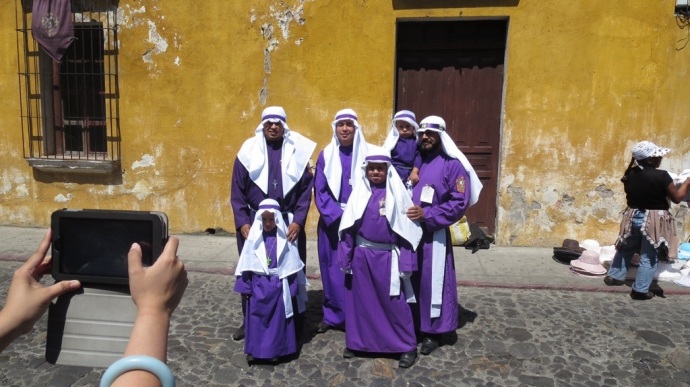 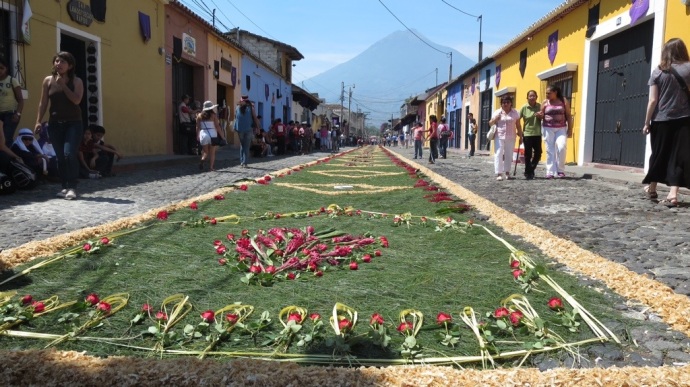 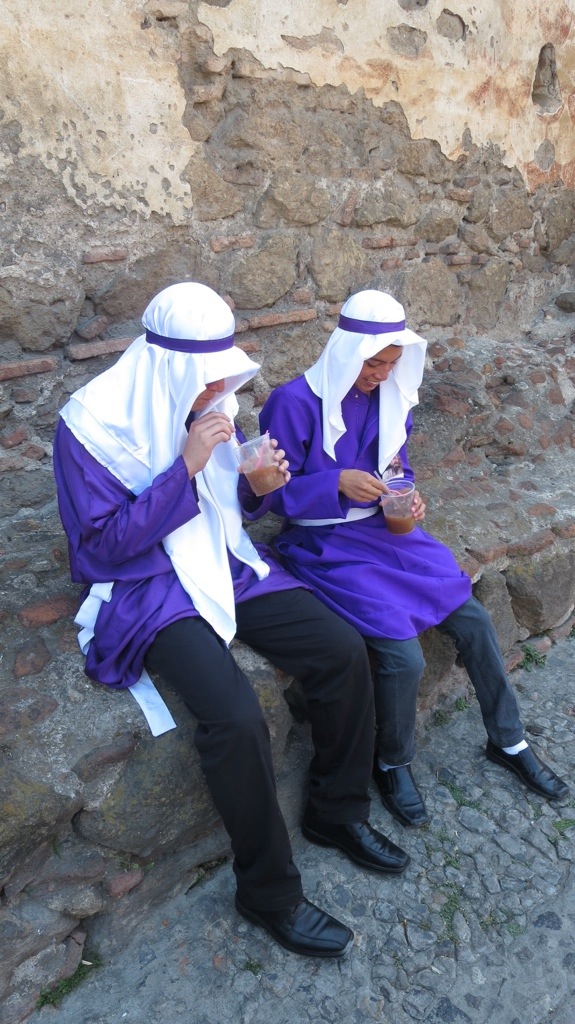 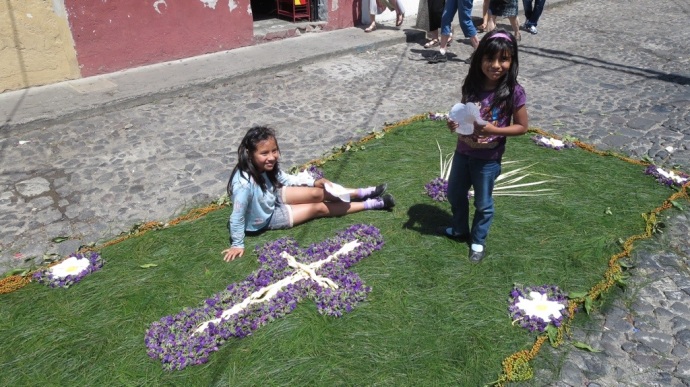 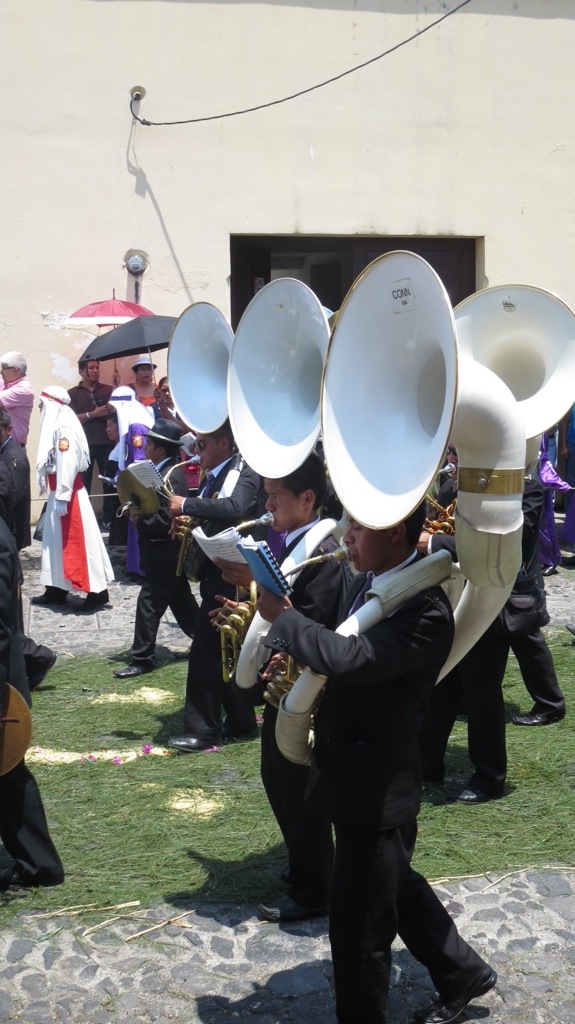 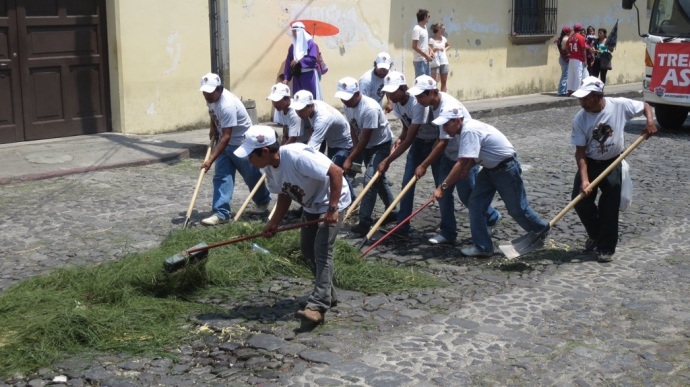