…and hello to Antigua

Posted on May 5, 2014 by toothontheloose

The trip to Antigua on Holy Saturday took quite a bit longer than my “road trip” a week earlier. Due to the influx of tourists to all of the pueblos around Lake Atitlán and Antigua, the traffic situation was ridiculous. Several tour agencies in Panajachel combined forces and hired a huge 25-person shuttle rather than the typical minivan-style coaches. I was lucky enough to get a seat for both me and my backpack towards the back of the shuttle. We took an alternate route out of Pana and everything seemed to be going well… until we hit the highway about half an hour outside Antigua. Stretched in front of us as far as the eye could see was a line of bumper-to-bumper traffic along our side of the four-lane highway, which was barely moving. At this rate, getting to Antigua could take hours.

This is when our driver made an executive decision. Without a word, he calmly pulled into the oncoming lane of traffic and casually bypassed about two miles’ worth of traffic by driving on the wrong side of the road. There were few cars coming in our direction, but that didn’t stop us from gaping, wide-eyed and incredulous, at the sheer ballsiness of our driver. At the next break in the median, he easily veered back into the line of traffic like nothing had ever happened. Half the shuttle erupted in nervous laughter; the other half burst into a round of applause. “Propinas, por favor,” (“Tips, please”), the driver joked. 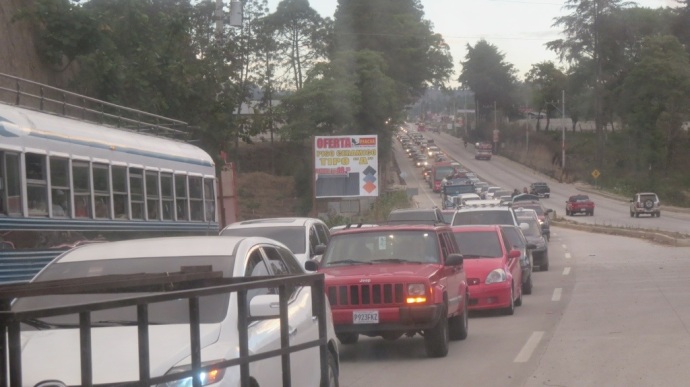 We arrived in town after sundown. Walking alone at night on the outskirts of Antigua is maybe not the best idea, but I was able to find my homestay while walking with a woman who owned a local bakery. I would be staying the next 10 days with the Rosales family: Doñas Natalia, Rosalinda, Sara, Irma, and their adorable dog, Maggie. 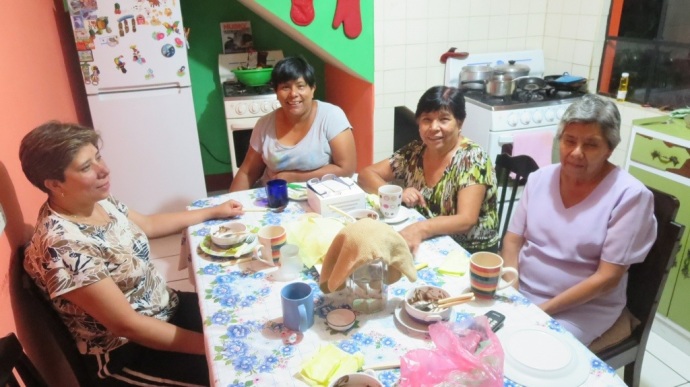 At the kitchen table, where I shared three meals a day with my family

I had a spacious private room in the house with my own bathroom. The rooms were on the second floor and opened to a sitting area that had a view of the surrounding hills. It was a beautiful place to stay, especially with the sun rising over the mountains in the morning. Early on one of the first mornings, I heard a rumbling noise which I assumed to be a truck passing by. I heard one of the women downstairs exclaim, “¡El volcan!” Nearby Fuego was erupting at the time of my visit, some distance away from town. Can’t say I’ve ever woken up to the sound of a volcano before! 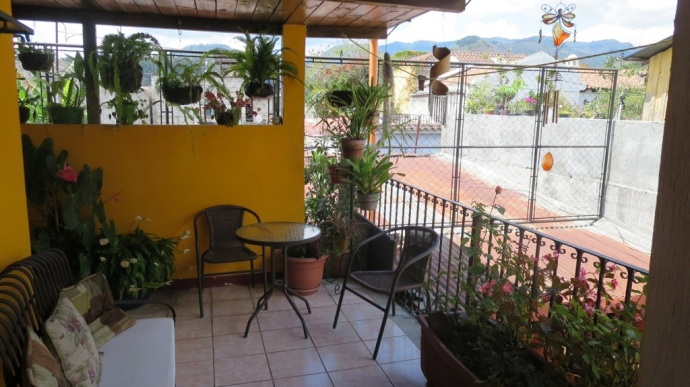 On Sunday morning, which was Easter, I went to Mass at the nearby Iglesia San Francisco and then got some breakfast. There were processions that day, too, but to be honest, I was getting a bit processioned-out and just caught the tail end of it as the anda re-entered the church in the early evening. There were huge crowds, firecrackers, and the obligatory Dora and Minion balloon vendors. Possibly the strangest thing was the presence of an emcee on a microphone who would shout what sounded like an Easter play-by-play as the procession neared the church doors: “¡Jesus ha resucitado! ¡Aleluia!” And the crowd would cheer and applaud. It kinda felt like a sporting event :). 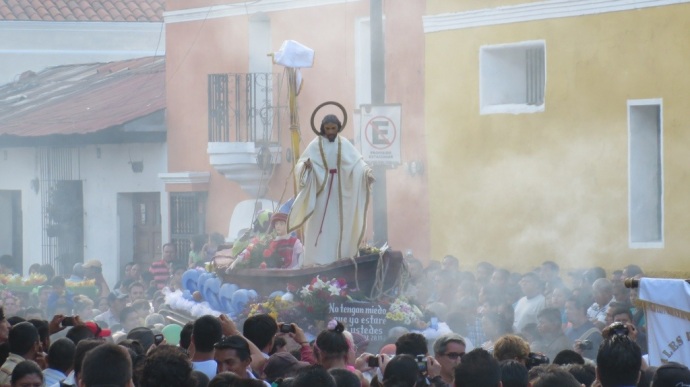 Jesus surfs back into the courtyard of the church 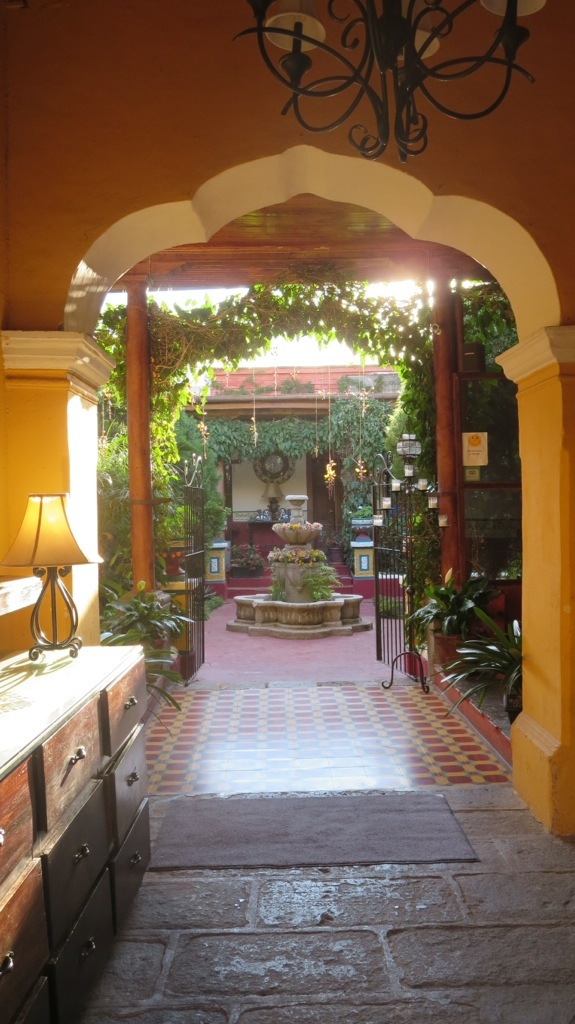 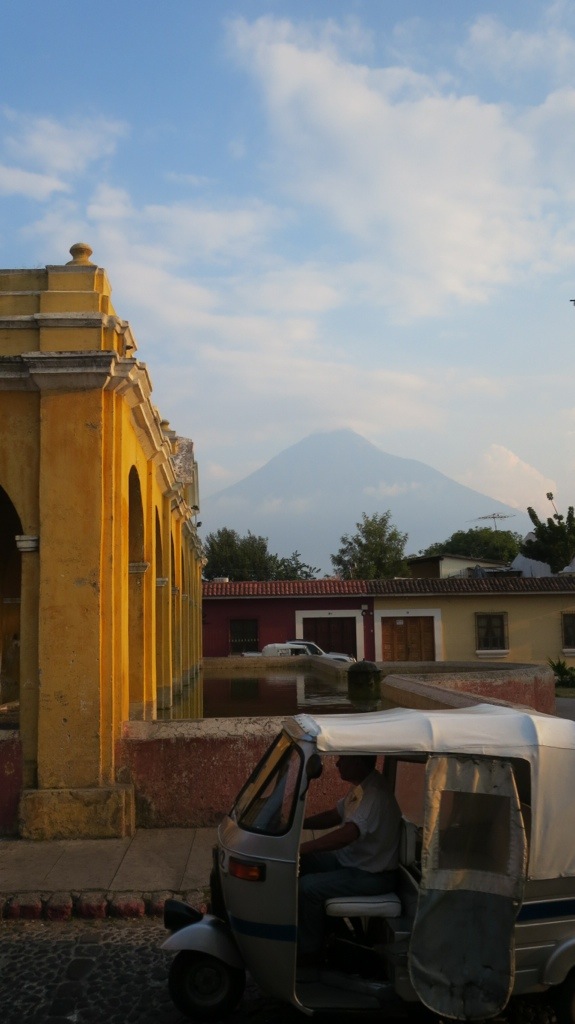 Volcan Agua visible to the south

Later on, I wandered around town, both scoping out a place to eat dinner (meals are not included with the homestay on Sundays) and checking for any pubs that might be showing Game of Thrones. I know, I know, pathetic, but I never would have cared had I not gotten a taste of Season 4 at the Alegre Pub. I did not find Game of Thrones at Cafe Sky; however, I did find Samir, a French traveler whom I had met in San Pedro. He and his friend Maria invited me to join them for dinner. The views from the roof deck of the cafe were breathtaking. I did not see this beautiful a view for the rest of my time in Guatemala. It was the beginning of the rainy season, so the evenings were turning more and more overcast as the days passed. I’m glad I got the chance to experience this: 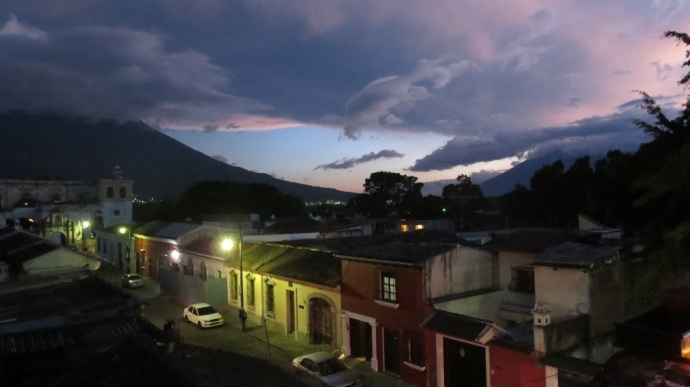 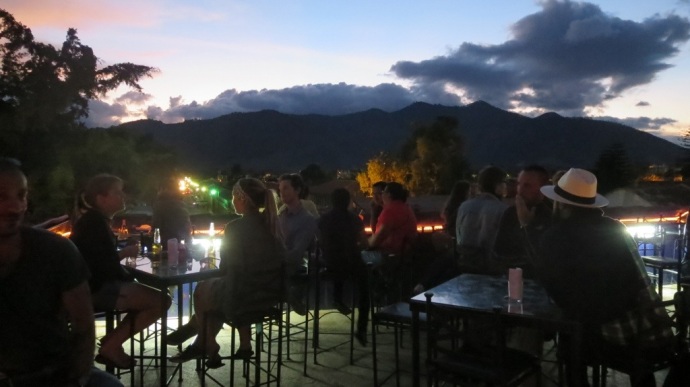 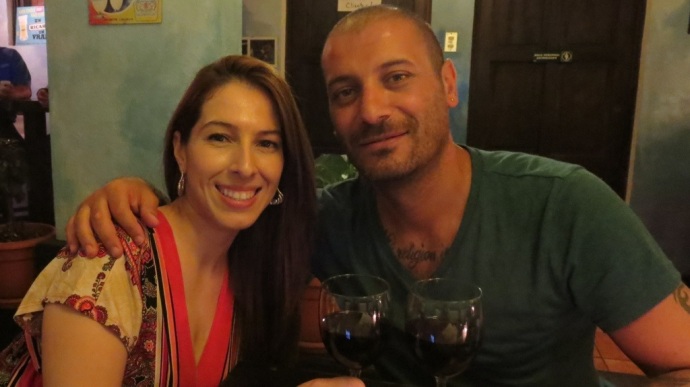 I guess Cafe Sky is the place to run into people that you’ve met in San Pedro, because just a few days later, I ran into Sarah and Hani, whom I had seen while watching the Good Friday processions. They were accompanied by new friends Erica and Sam. Both of these American couples are traveling by camper from the US through Latin America. That is, if you could call Skyhorse a camper. Seriously, Sarah and Hani’s vehicle needs to be seen to be believed: Adventures in Skyhorse. Erica and Sam also have a ton of great stories from camping and exploring in Mexico at Song of the Road. Even though we had never hung out before, they were fantastic and hilarious company. Can you see why I never get any work done on my blog? 🙂 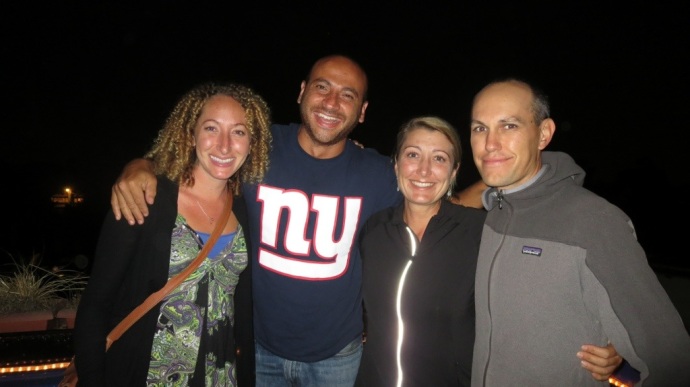 2 thoughts on “…and hello to Antigua”