Back to school (again)

Posted on August 23, 2014 by toothontheloose

I had signed up for a two-week Slovenian language course during my stay in Ljubljana. I had taken these same courses for one month each during the summers of 2000 and 2001 (ahem, when they cost much less!) but had gotten little to no practice speaking since then. There ain’t a lot of Slovenians in Boston ;). So I anticipated two weeks of trying to refresh my memory.

Shockingly, I remembered enough for my placement test and interview to be placed in a higher level class than I would have anticipated. Unfortunately, I spent the first week of classes stuck in Spanish mode, so I spoke in a sad Slov-anish for much of the time, with a few German and Italian terms thrown in for good measure. I found myself answering questions in the affirmative with “Si” or saying things in restaurants like, “Ja, ich moechte ein klobaso, pero no necesito kruha ali senf, thanks. (“Yes, I would like one (German) sausage (Slovenian) but I don’t need (Spanish) bread or (Slovenian) mustard (German), thanks (English)”). My poor brain was so confused.

My teacher, Anja, was very understanding, as were my fellow classmates: Melisa, Jennifer, and Maren from Germany; Julien from France; and Anđela from Serbia. Later in the week, we were joined by Daniela from Germany and Carlos from Italy. We made a good group. Every day, we had a half-hour break, so we would go to one of two nearby cafes for coffee. Although the group typically picked a place with an outdoor terrace, I preferred a smaller cafe, Of Moment, because it is owned by my cousin’s friend Aleksandra. (Talk about word traveling fast: some days I would come home from school and mention to Katja that I had gone for a coffee that morning. She would answer, “I know. I heard.” LOL). 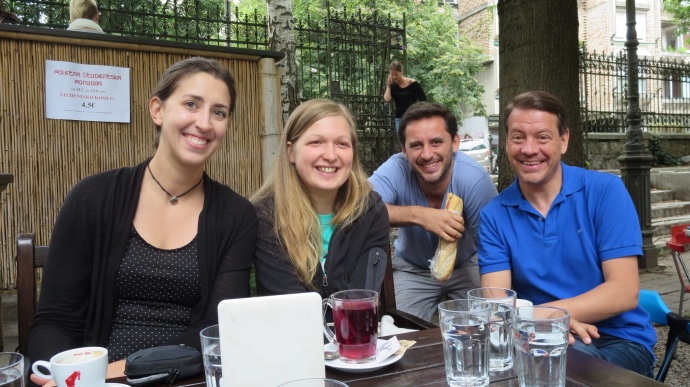 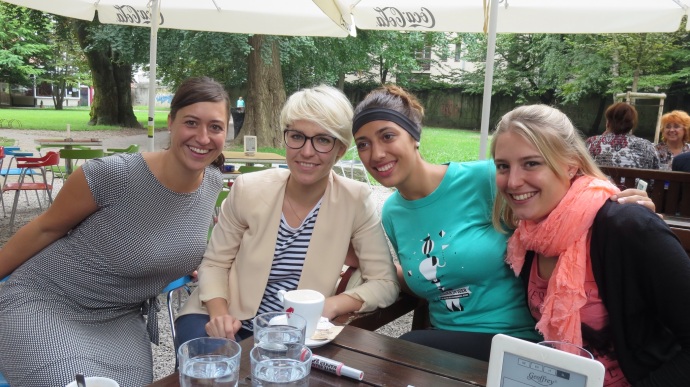 Aleksandra at Of Moment

Anja would include a lot of learning games in our lessons. My LEAST favorite (because my vocab is not the greatest) was a game called Vroče Stol, or Hot Seat, where she would write a term on the dry erase board behind you and your classmates would have to describe the word to you (obviously using only Slovenian). I much preferred the trivia game, similar to Jeopardy! I am generally pretty non-confrontational and not competitive about many things, least of all sports. But challenge me to a round of Jeopardy!, and I will destroy you. 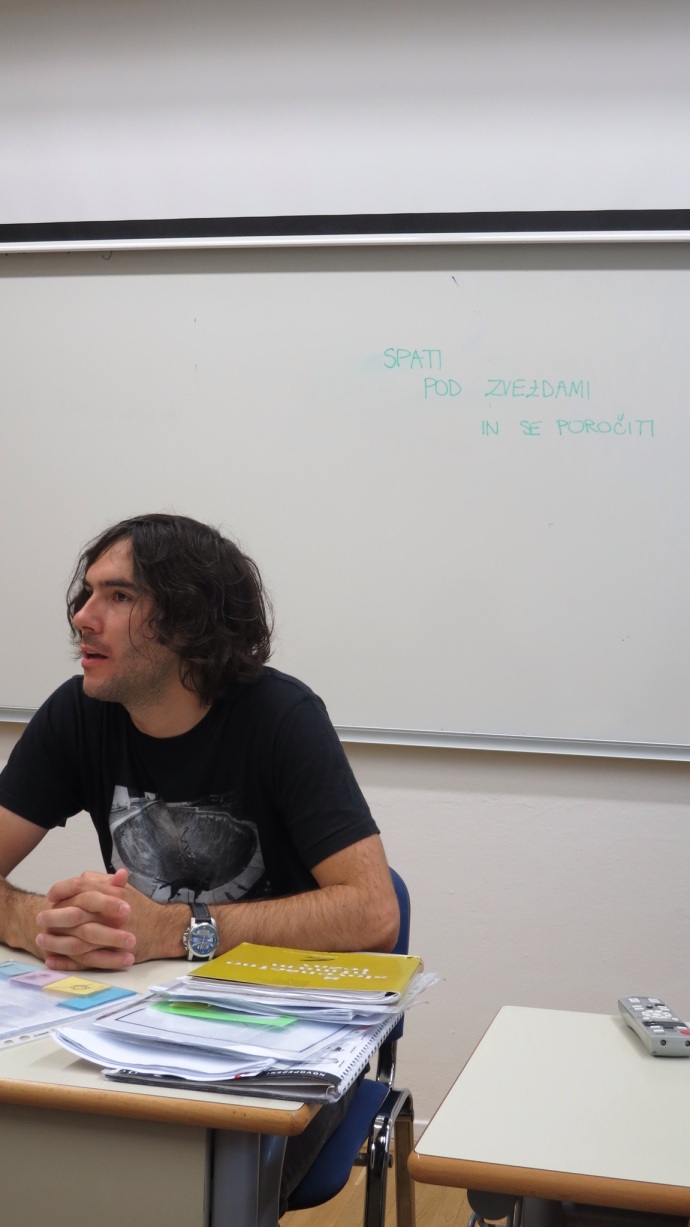 Julien, ever the romantic, in the Hot Seat (The answer, an inside joke based on one of his responses during class, is “to sleep under the stars and get married”) 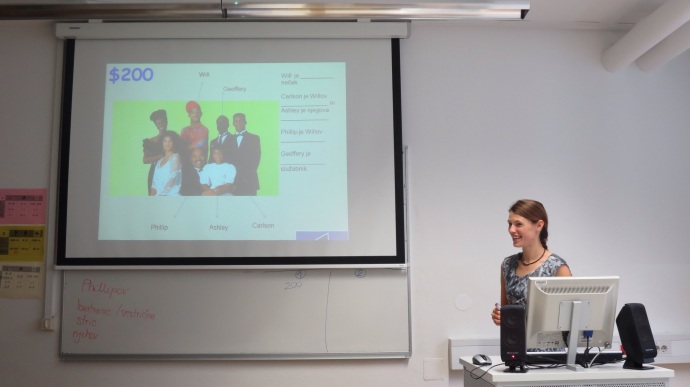 Anja reading a grammar question based on familial relationships on The Fresh Prince of Bel Aire. Guess who answered it?

There were also plenty of planned after-school activities. On the first night, the school took a group tour of the ruins of Emona, the Roman settlement which preceded Ljubljana and is celebrating its 2000- year anniversary this year. During the tour, we stopped at a pub for typical Roman honeyed wine and stuffed dates. And yes, we wore togas.

I made this guy hold my ice cream while I put on my toga. He was a good sport. 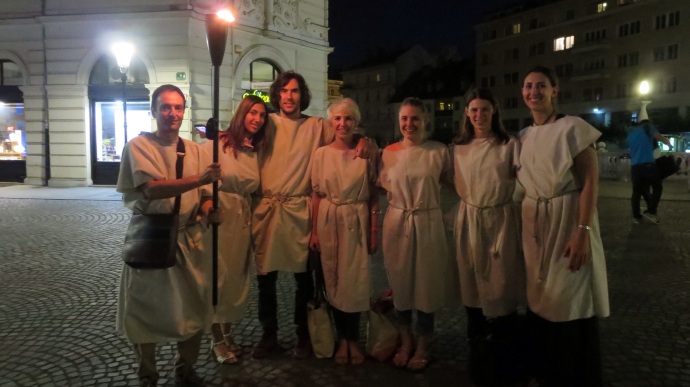 We had a bowling night on Friday evening and went out afterwards. 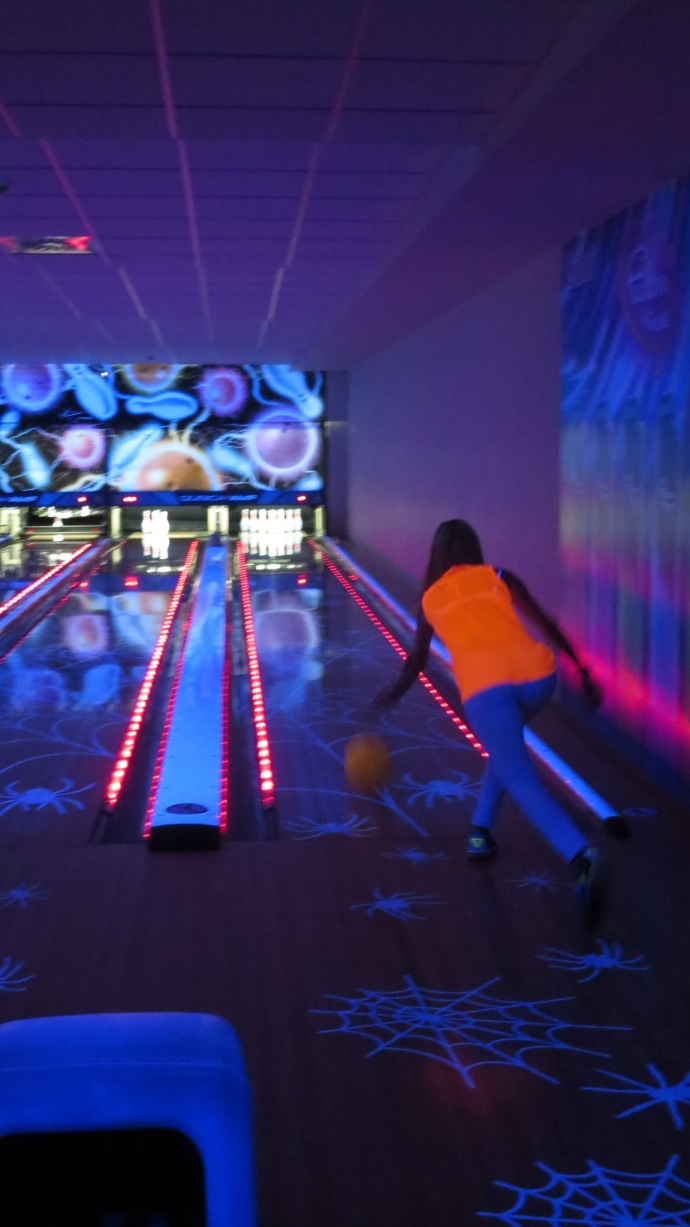 Our class took an afternoon bus trip to Bled but couldn’t enjoy the scenery much due to a torrential downpour that began just after we arrived. We took this as an opportunity to gorge ourselves on kremšnita and coffee instead. 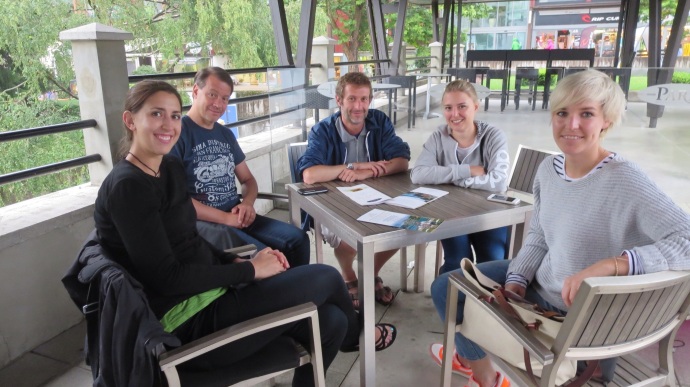 Carlos, Mirko, Jennifer, Melisa, and I 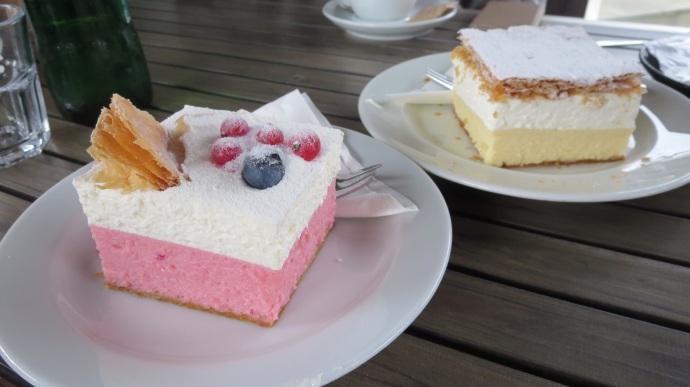 Traditionalists might find berry-flavored kremšnita to be sacrilegious, but I loved it

Finally, we had our graduation ceremony. This was fun because my mother could actually come to see it! Every class put on a skit or presentation of some kind. Our group was down to 50% due to early classmate departures, but we made it work. We each received a diploma, and then it was time to celebrate. 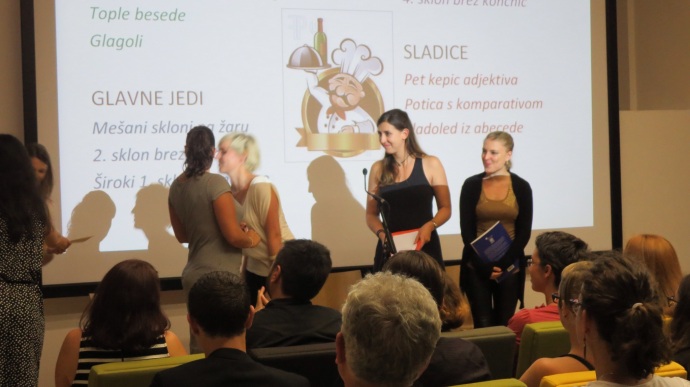 Mirko, Daniela, Eduardo, and I

6 thoughts on “Back to school (again)”