After the paradise of Laguna de Apoyo, I needed to start heading back northwest in order to begin my month of Spanish classes in Guatemala as scheduled. This involved several long-haul trips, which were considerably more pleasant than my initial bus ride to Nicaragua because I no longer felt as if my body was plotting against me.

First I needed to get back to Honduras. The same 8-hour TicaBus that I had taken from Tegus to Managua also travels back to Tegus… leaving Managua at 5:30am. I did not feel comfortable trying to walk or even get a taxi to a bus station at four in the morning. I learned that TicaBus actually has hotels in some of their bus stations for this very reason. I decided it was worth a shot – especially at $14 a night – considering I hadn’t planned to do much in Managua, anyway, the evening before my bus ride. I splurged on a taxi ride from Laguna de Apoyo to Managua because I would be arriving after dark. The TicaBus hotel was a good idea, in retrospect, although the dim lighting gave it a decidedly creepy feel. My room was simple and clean, however (minus a cigarette burn on the comforter) and included a towel, bar of soap, and shampoo packet. Aside from going to the shared bathroom to brush my teeth and wash my face, I stuck to my room (quite literally, due to the oppressive heat), sleeping spread eagle in minimal clothing under the ceiling fan… and keeping the chain locked.

It was a good thing, too: the following morning at 4am, I received an (unrequested) wake-up knock at my door. I had somehow cooled off enough overnight to wiggle under the bedsheet, for which I was immediately grateful when the hotel worker opened my door (did he get a key?!?!?) to the chain and barked, “Cuatro!.” I bolted upright, heart pounding madly, holding my sheet up over my bare skin and squinting at the blurry silhouette in the light of the open doorway. The door then closed, and I was left there in the darkness. Um, what the hell???

The ride to Tegucigalpa was pleasant, again overlooking TicaBus’ unfortunate choices of loud-volume movies: Alvin and the Chipmunks, some other animated movie involving a bear and an antelope… sigh. Want to listen to the new Beck album you just downloaded? Sorry, it’s Tinkerbell for you today. En español.

I was SO HAPPY to arrive in Tegus, where I was picked up at the bus station and driven to the high school of my new friend Nicole, who was one of our student interpreters on the CapeCARES trip. Nicole’s family generously offered to let me stay at their house while in Tegucigalpa for the night. Our other interpreter, Valerie, took me on a fantastic tour of the Discovery School where they study. What a gorgeous campus! 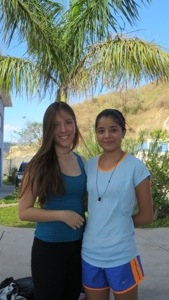 The rest of the night was spent in celebration of Honduran Fathers’ Day. I went out for an early dinner at a shopping plaza with Nicole and her family. I feel like there are two Tegucigalpas: “the most dangerous city in Central America” that I read about in books and newspapers, and the Tegus where I can visit a cozy crepe restaurant and an import store for a beer tasting on family night. (Note to JP residents: it is possible to buy Sam Adams Seasonal in Honduras!) Our second dinner came later at Nicole’s house, where her parents had invited over a big group of family and friends to celebrate.

I was overwhelmed at the kindness and generosity of Nicole’s entire family and hope that I can see them again in the future. People like them are just another reason why I love Tegucigalpa. 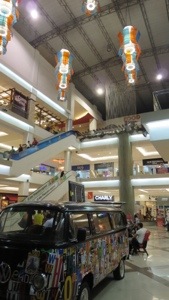 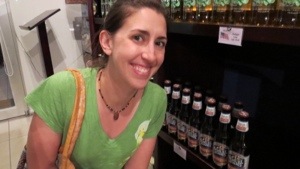 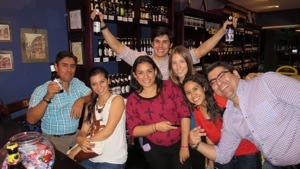 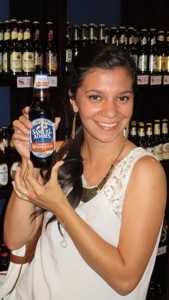 Introducing the family to Sam Adams 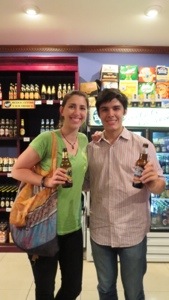 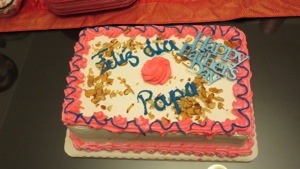 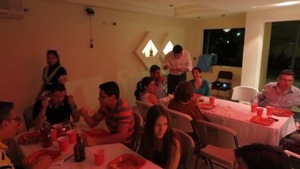 One thought on “Tegucigalpa: Home Sweet Home (for a night)”