At the Copan, Copan Cabana

And yes, I did just write that.

Compared to the TicaBus, my Hedman Alas from Tegucigalpa to Copan Ruinas was the height of luxury (I guess it should be at twice the price): controlled air conditioning, muted overhead movie, and a snack! Oooh! I also loved their station in San Pedro Sula, where I had to change buses. Super clean, well- lit, and playing awesome music. I heard both Daft Punk’s “Digital Love” and Billy Idol’s “Eyes Without a Face.” Never underestimate the importance of excellent waiting room music. 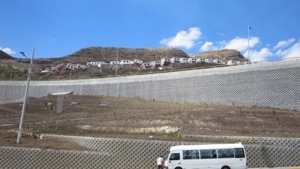 The drive to Copan Ruinas was absolutely gorgeous. Through its winding hills covered in green forests, I was thrilled just to be able to listen to music and look out the window at the scenery. Once in the town, I traveled by tuktuk to my hotel, Hotel ViaVia, which had come with high recommendations from a Honduran friend. It was very convenient to have a restaurant and travel agency within the hotel, since I was able to book a few fun activities through them. I really wanted to try an all-day package with horse-riding, hiking, and a visit to a coffee finca, or plantation, but there was no availability on the days I was there.

My first morning in Copan Ruinas, I walked to the nearby Mayan ruins of Copan. Although these ruins are small in relation to other major sites like Chichen Itza, they are renowned for the extent to which the sculptures and painted colors have been preserved. I splurged on a guided tour with Vergilio, who had been on the team which found the Rosalila Temple on the site in the late 1980s. He was a wealth of information, and I learned a ton about the history of the Mayans in the area. By the end of the tour, I was even able to pick out the names of certain rulers, like 18 Rabbit, when I saw them carved into the nearby stones. Vergilio told me that one of the many Mayan languages was his primary tongue; therefore his name is not actually “Vergilio” but a complex-sounding Mayan name which translates into something close to “the bat that flies in the night.” He joked with me that his name was actually Batman ;). 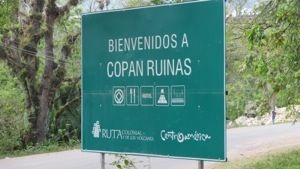 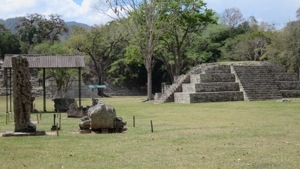 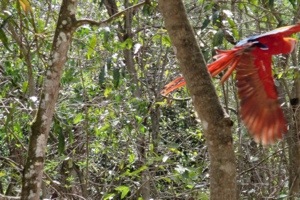 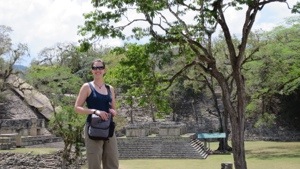 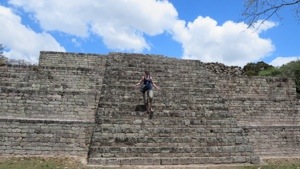 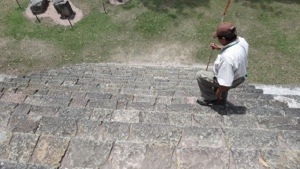 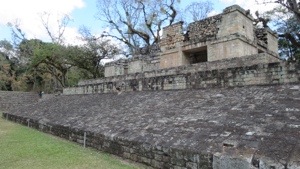 Mayan ball court. Unlike in American sports, the MVP received the honor of being sacrificed to the gods. Go team! 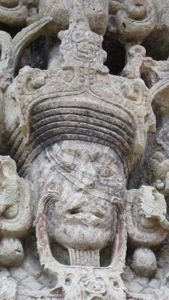 The statue missing from the middle of the Hieroglyphic Stairway was used by the Honduran government to pay the US for the completed excavations earlier in the 20th century. Its current location? The Harvard Peabody museum in Cambridge, MA… which I failed to visit before moving. Grr!

Archeological and dental double geek-out: the Mayans knew about rugae!!! 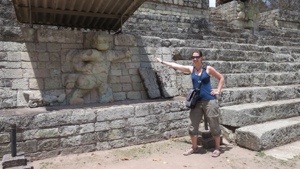 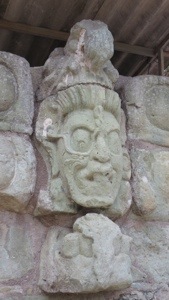 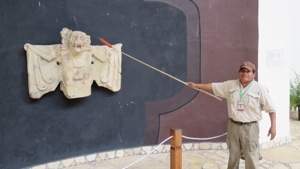 Vergilio with his namesake, the bat 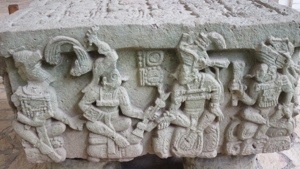 On my second morning, I went for a guided hike with Girardo, the Belgian owner of Hotel ViaVia. We went with his dog and explored some ruins farther out from the main site, and i got to see some amazing views of the valley.

Not the dog who joined in on the hike. This guy had been clipped in two different places that morning (one was his claws; you can guess the other) and looked like he needed a drink. 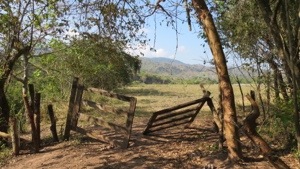 Later on that day, I booked a trip to Jaguar Springs, the local hot springs. As I boarded the shuttle, I found that I was the only passenger. The driver, Onri, and his coworker, Carlos, work every day, seven days a week, nearly 365 days a year, driving the shuttle from early in the morning until late and night. Onri stated that the only time that he really gets a break is when he takes passengers to the hot springs; then he can at least enjoy the baths until his passengers are ready to leave. We spent most of the 1.5 hour drive there practicing our respective Spanish and English with each other. I found that we were able to understand each other really well.

And boy, were the springs a good idea. The site sprawled out through the trees along an entire hillside: natural hot pools, cold pools, mud baths, steam baths, “head and neck massage” waterfalls, etc. You could spend a whole day here and not see them all. Coincidentally enough, the large group of patrons nearby were a dental brigade from UConn. It was kinda funny to be sitting in a steaming hot bath with a bunch of others dentists from New England. 🙂

Onri and Carlos were total sweethearts. We spent the whole afternoon talking in the pools: they told me about their wives, I told them about my travels, and we told each other language jokes. My favorite Spanish pun of theirs?

Q: What did the Japanese man say when he lost his motorcycle?
A: Yo no miro mi Yamaha! (I don’t see my Yamaha!)

They also really liked to say, “See you later, alligator!” and were pleased to learn, “After a while, crocodile!” 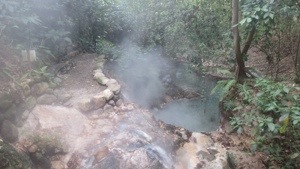 Once we had transformed into large prunes and the skin of my legs turned a bright red due to the increased circulation, we decided it was time to leave. Off we went in the shuttle, listening to what I realized was Spanish-language Christian reggaeton (there’s a first time for everything!) and picking up any locals on the way who needed a ride. A lot of people were heading for Copan Ruinas to celebrate at the city festival. I joined in on the fun with friends from the hotel and was thrilled to hear some of my new favorite songs on the dance floor. Check out “El Caballito de Palo” by Joseph Fonseca. Catchiest. Song. Ever.

I REALLY would have liked to stay in Copan Ruinas at least another night, but the timing of shuttles to Guatemala ended up making my decision for me. I was scheduled to start Spanish classes on Monday, so I needed to start heading in that direction. My heart broke to be leaving Copan. Maybe next year…?

The town of Copan Ruinas 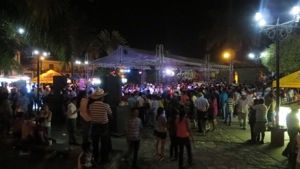 2 thoughts on “At the Copan, Copan Cabana”