Why I love bachata and hate boats

Posted on April 5, 2014 by toothontheloose

The afternoon shuttle ride from Antigua, Guatemala to Lake Atitlan, where I would be spending the next month studying Spanish, was thoroughly enjoyable due the scenic views and our driver’s music selection. (I had also picked the passenger seat with a headrest in contrast to that morning’s tiny backrests. So much better!) He had several flash drives of music that he could plug into his stereo. Much of this was current Spanish-language radio hits, while others were bachata remixes of popular American songs.

This is thing about the bachata style of music: it makes everything better. It expresses joy and love and passion but with an underlying hint of sadness at the same time. And anyone who knows me well knows that I like a bit of darkness in my music. I become really really happy when I listen to grunge ;). Bachata transformed Coldplay’s “Clocks” and Whitney Houston’s “I Will Always Love You” into danceable melodies. Normally, I like Adele’s “Someone Like You”… but it’s the type of song that makes me want to curl up in a ball on my couch in sweatpants and either drink heavily or inhale a pint of Ben and Jerry’s. But set that baby to bachata, and it’s time to put your dancing shoes on! Bachata has even accomplished the seemingly impossible feat of making Jason Mraz palatable. (Whaaaat? Well, I never!) I found myself tapping my foot to the bachata-style “I’m Yours,” when typically I start looking for the nearest sharp object when I hear the original version. (Only a slight exaggeration).

Our shuttle descended through the town of Solola down fog-covered roads to the lakeside pueblo of Panajachel. In order to reach San Pedro, I would need to take one of the many lanchas that ferry passengers across the lake throughout the day. The problem: the weather was overcast and rather cold, and the water was wicked choppy. I do NOT do well on small craft. Still, without any realistic alternative, I threw my backpack in the lancha, donned my acupressure wrist bracelets, and hoped for the best.

As our boat bumped along the waves, water and mist splashed at us from the front of the boat. One of the workers who was sitting on the roof lowered a bright blue tarp over the front of the seating area to keep the water from hitting us. (The couple sitting in the front two seats of the boat were not so lucky). The upside was that the tarp blocked the wind, keeping the interior a bit warmer; the downside was that the tarp dangled about three inches in front of my nose, creating the equivalent of being blindfolded on a magic motion ride. Vomitus.

Roughly twenty minutes later (was it twenty? I don’t know, I was blindfolded), a hint of sun started to peek through the clouds. The tarp was lifted, and land ho! Whereas before, the mist obscured any type of view, we could now see our boat approaching the other side of the lake and the dock of San Pedro. 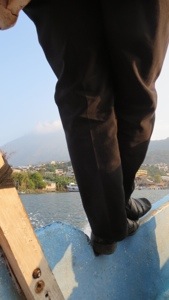 Pleasantly surprised that I had not lost my lunch, I disembarked and got my first look at the town that I would call home for the next month. It was my last night of “vacation”: the next morning, it would be back to school for me.

5 thoughts on “Why I love bachata and hate boats”