This morning was yet another showcase of pilgrim discourtesy. The alarm of the lovely American pilgrim in the bunk beneath me – who had snarled all night with a ferocity that made any form of earplugs useless- went off at *4:45am.* And then more slamming of doors. I had also made the mistake of orienting myself with my feet rather than my head towards the door to the room; in this position, the overhead light in the hallway would shine directly in my face when the door was open. Which was from 5am to 6:30, until everyone else had left.

When I awoke to an empty room, Portomarín had been enveloped in a thick fog that made it almost completely unrecognizable as the breezy, relaxed town that I entered the day before. I looked dubiously out the window of the hostel and immediately transferred my rain jacket from my send-ahead backpack to my daypack. The teenage girl at the hostel desk gave me the “you so crazy” look, but I would rather be safe than sorry.

Reserving a room ahead of time has made me a little lazy, so I ate breakfast and left town a bit later than usual, making my way back over the river and entering the fog-covered forest paths. After an hour or so, a terrible stench filled the air as I slogged up the hill; I was thankful for my red bandana (thank you, Apol!) which I used to cover my mouth and nose as I walked. My guidebook stated that the Camino passes a fertilizer factory. Yuck.

Not long after 10:30, the fog miraculously lifted (well, maybe not so miraculously. I think that this happens almost every day!) to reveal a sunny, hot day. As I passed from the shady into the sunny areas of the path, obnoxious clouds of black flies would swarm around me. Unlike most flies that I have seen, these just hovered lethargically around my hands and face. Super annoying. And then I had that Beck song stuck in my head the rest of the day.

I made a rest stop in Gonzar to use the baño, buy some juice, and get a stamp. One thing that I have not explained is the stamp system. Every pilgrim is issued a credencial, or pilgrim passport, upon beginning the Camino. At every place of accommodation (and optionally at restaurants and bars you visit), your credencial is imprinted with the unique stamp of that establishment. This passport is presented to the staff when you check into an albergue: it proves that you are a pilgrim (and not just a thrifty traveller looking for a cheap dorm bed) by giving a record of where you have been along the Way. At least two stamps a day for the final 100k are the verification needed to receive a compostela, or certificate of completion, at the end of the Camino. This number has increased from the initial requirement of one stamp per day because of the number of disingenuous people who were cheating by driving (not walking or cycling) town to town to get enough stamps for a compostela. On several occasions, I myself saw two apparently healthy pilgrims with backpacks walk out of a hostel , continue down the road directly to a car that they had obscured a short distance away, throw their packs in the trunk, and drive off to the next location. Maybe there is a reasonable explanation for this, but if not, this is both sad and unbelievably pathetic.

But I digress. In Gonzar, I bought a juice and looked around the cafe, which was bustling with pilgrims that all seemed to know one another. One of the downfalls of taking time off is that the group of faces that you started with is often far ahead of you. Garrett and Lynn were already heading to Palas del Rei. I sadly wondered if I would see anyone I knew again.

And then I ran into this girl: 🙂 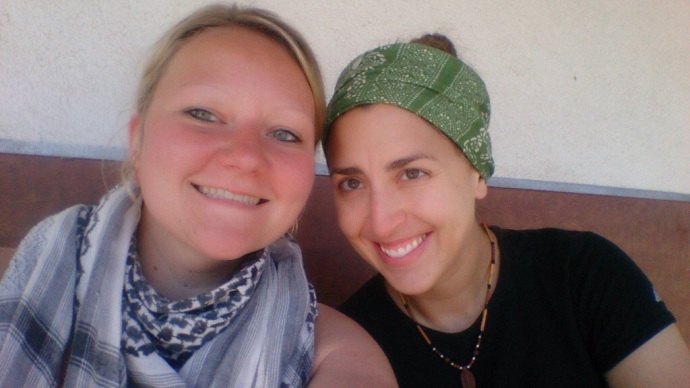 After her boyfriend Chris had returned to Germany, Jasmine had been far ahead of me but had experienced a setback: a really bad cold and tendinitis in her lower leg. Ah, tendinitis, bane of pilgrims. I encouraged to her come with me to the next town, where I already had a reservation. She called to see if there were any beds available, and the decision was made. We spent the rest of the walk there catching up.

In the early afternoon, we arrived in Ventas de Narón to check into our hostel, which was called… wait for it… Casa Molar. Bwah hah! I told her that the hostel name was my presiding reason for opting to stay in Ventas: as an oral health professional, I felt destined to stay there ;). And other than being my first experience with the unfortunate trend of supplying disposable bedsheets (think of the wispy translucent cloth used for hair nets), it was a great place to stay. Fewer than 50 miles to go! 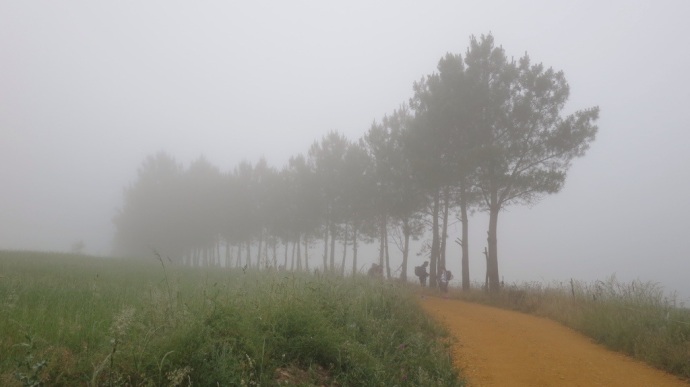 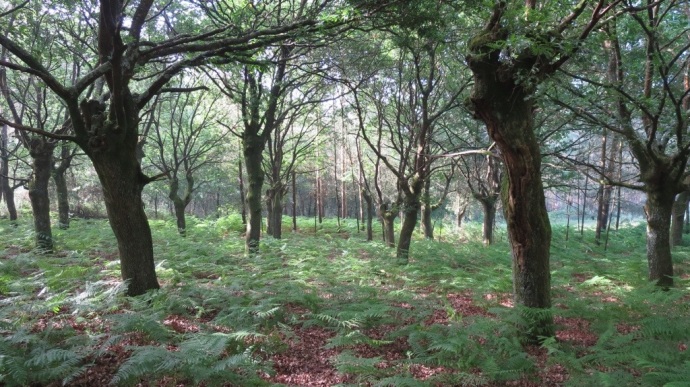