Distance walked: 10.3 miles
Song of the day: “Promise” by Romeo Santos and Usher (bachata still gets stuck in my head)

Jasmine and I stayed in a dorm room at Casa Molar with a group of four Americans, and older German man, and a 20-something German woman. I haven’t bothered setting an alarm lately because the other pilgrims just wake me up, anyway. So imagine my surprise to wake up naturally at 7:45am to discover the American group gone and the Germans peacefully sleeping. It had been so quiet: I had heard nothing that morning. I made a mental note to thank the American pilgrims if I ever ran into them again.

We walked along fairly slowly that morning, although Jasmine’s leg had been feeling much better since she had decided to walk in her sports sandals rather than her boots. We have seen a lot of pilgrims doing this just to give their feet a break from blister pain.

It is really funny to watch the “new” pilgrims who have just started out. You can usually tell the difference between those who have started in Sarria versus those who have been walking for multiple weeks: no limping, tiny backpacks, clean boots (or even Sketchers-like lightweight athletic shoes). I don’t hold this against them (although there is a noticeable bitterness among some of the long-distance pilgrims, who seem to feel that this is a cheap and easy version of pilgrimage). The way I see it, some people can’t get a month off from work to walk across Spain. Some people would like to experience the Camino but maybe have physical limitations. Some people just don’t want to walk that far. So I don’t get angry when I see the newbies. That said, I found it absolutely hilarious to see a group of Spanish teenagers walking ahead of us. None of them could be older than 17. One of the boys was carrying a boombox, they were all wearing flimsy sneakers, and the girl- a Hermione Granger lookalike- wore a trucker hat, neon green crop top exposing her tummy, and denim short shorts. That would have been really funny in the Pyrenees!

Other than a pitstop for some groceries in Palas de Rei, the rest of the day was pretty uneventful. Jasmine and I had reserved beds at Casa Domingo, a small private hostel just outside of San Xulian. I had decided that from this point forward, I would make an effort to stay in smaller private albergues rather than the larger municipal ones. From my recent experiences, they tended to be cleaner and more atmospheric. Casa Domingo did not disappoint. A converted farmhouse, it had come with high recommendation in an email from Colin, who had stayed there several days earlier. Situated next to a farm, it had a large communal dining room with a television so that everyone could watch the World Cup match that night. (Jasmine and I had neglected to see the notice that you needed to sign up for the group dinner by a certain time, so we didn’t get to participate. Oops).

Below you will see some questionable modern art from a restaurant along the road today, a much nicer pilgrim monument from Palas de Rei, and what happens when I hang up my laundry thinking that clothespins are not necessary. Enjoy :). 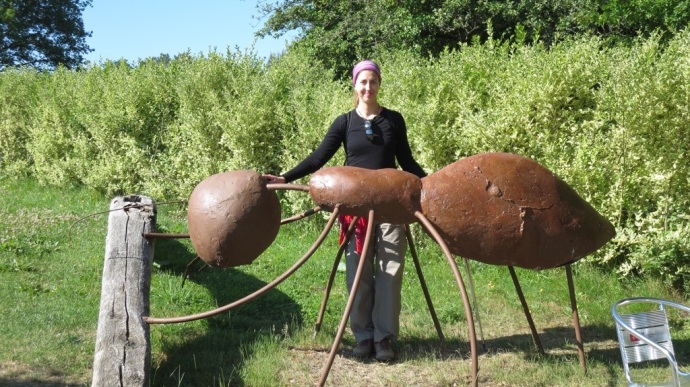 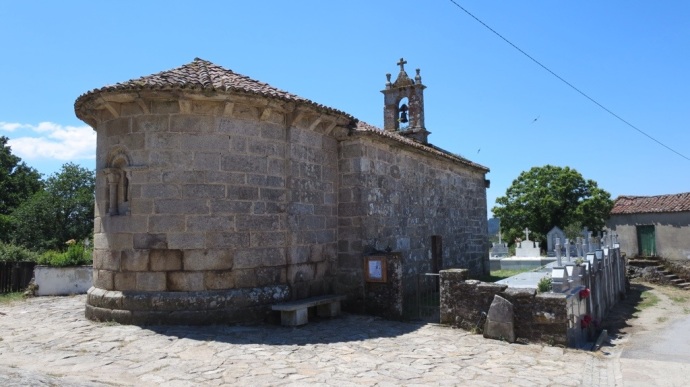 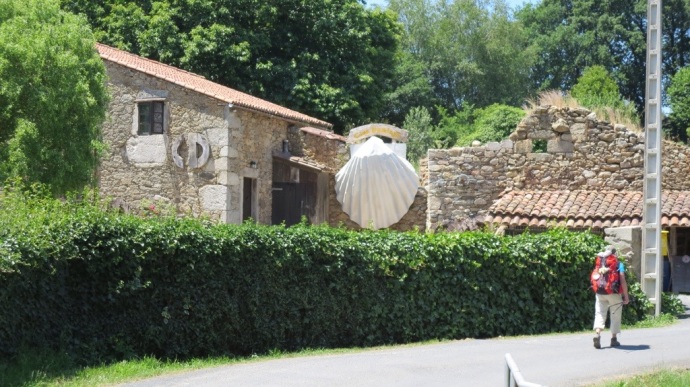 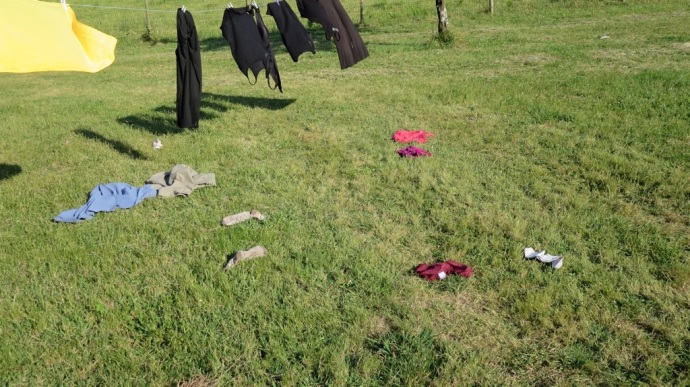